Has Pac-man used all of his continues?

Well… decades after the badass ghost buster took over the world, his skull has been found in the back of Whitney’s limo amongst a few lighters and spoons. Ms Pac-man, who is rumored to still be addicted to dots herself, is devastated. This shocking evidence suggests that Pac-man was not just an 80s superstar brought to life by Namco, but in fact as real as you and me.

That’s a load of bull of course.

The skull was created, just for the hell of it, by French artist Gentil Garcon who teamed up with paleontologist Francois Escuilie, for this resin representation. For some reason they have given Pac huge gnashers that look as though they would make Binky and his cronies totally shit themselves.For someone who looks like a duck’s beak though, you have to agree he hasn’t done too badly for himself, and has pretty much been on literally everything imaginable over the years. From clothing, accessories and gadgets to T.V cameos, food and also this guy’s arse. 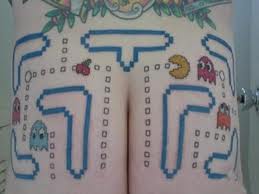