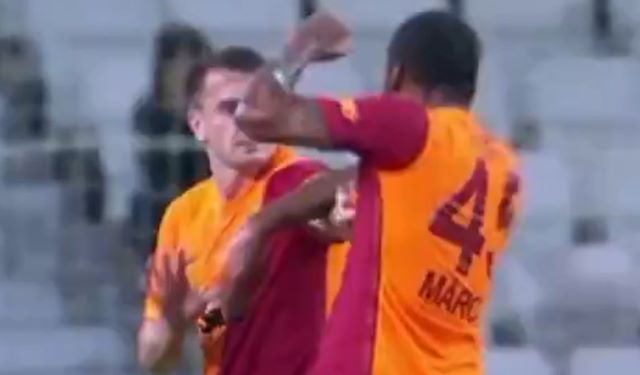 This guy can’t stop beating up his own teammates.

Marcao went for Akturkoglu in the 61st minute, with other players intervening before a VAR check resulted in the defender being sent off.

Apparently, this isn’t the first time Marcao has struck a player on the pitch.

It’s claimed he hit Halil Dervisoglu during Galatasaray’s friendly vs the Turkey U19 team last year.

Fans calling the Brazilian defender’s contract to be cancelled.#GRSvsGS https://t.co/mxhecRZQZg

Galatasaray boss Fatih Terim admitted to reporters he has no idea what the hell happened:

I don’t understand the reason that pushed Marcao to do this. What did he do that made him so angry… Unfortunately, these things happen in football. They will continue to happen.

I guess he’s just happy that Galatasaray managed to hold onto their 2-0 lead despite the incident. How much do you have to hate your own teammate to actually be willing to receive a red card in order to attack him in the middle of a game?

The best part is that this isn’t even the first time Marcao has attacked a teammate in the middle of a game. Not even Michael Jordan was that much of a c*nt!  Can only imagine how baffled the ref was too. Something tells me Marcao won’t be at Galatasaray for too much longer, which will probably be a relief for all his teammates. Onwards and upwards.

To watch a massive fight break out at a Brazilian football match after a player stripped naked to celebrate scoring, click HERE. Can’t be doing that in Brazil.