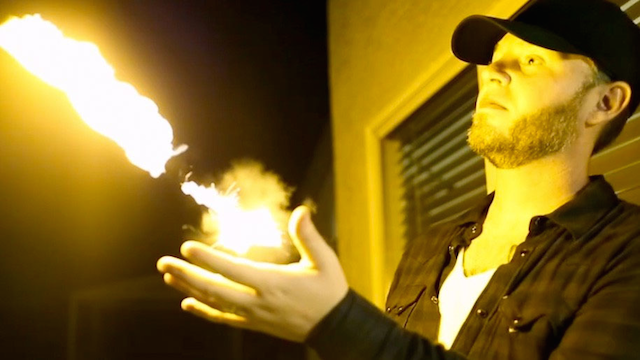 Not sure why anyone would want to do this but it’s still pretty damn cool.

Following on from the James Bond laser watch that we featured last week, there’s another new James Bond esque device for your Christmas list in the form of Pyro – a gadget that allows you to shoot balls of flame from your wrist.

As with the James Bond laser watch, unless you’re a magician or secret agent I’ve no idea why you would want to own one of these – although the thought of taking one on a night out initially sounds like a good idea, in reality it’s actually terrible and could lead to injury and/or arrest – but nevertheless you can buy one now for just $174. That is providing you’re over 18 of course.

It’s the brainchild of some magician/maniac called Adam Wilber who you can see prancing around like a meathead in the bizarre promo video below that also features a desert, swimming pools, fast cars and a whole lot of shit on fire. Unfortunately, it wasn’t enough for me to add Pyro to my Christmas list though.