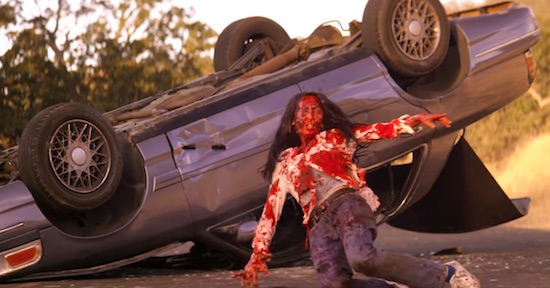 The idea of a mystery sniper pinning down some people in a weird location is nothing new  – check out that British movie Tower Block from a couple of years ago – but that doesn’t mean that it can’t be the plotline for a new film and look completely awesome.

‘Downrange’ tells the story of six college students car pooling across the country when one of their tyres suddenly blows out on a strip of desolate road. They soon discover that this is no accident and a sniper is firing on them from an unknown location and determined to kill them all. Worst road trip ever.

The battle of wits is on as the students desperately try to escape from the absolutely horrific situation that they find themselves in:

Doesn’t look like too many of them are going to make it out alive there huh does it? In fact it probably looks more likely that all of them are going to die given the car crashes, shots fired and people walking around fully on fire, but I suppose we’ll have to check it out properly if we want to see what happens. No release date yet though, so it might be a while unfortunately.

For more movies about people getting pinned down by snipers, check out John Cena’s ‘The Wall’. Better than you would expect.