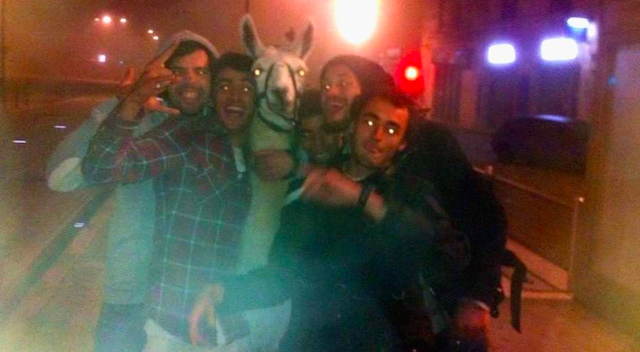 You haven’t really partied until you’ve kidnapped a llama and taken him on a train with you.

Five French students were out partying at a club in Bordeaux last Thursday, and as they stumbled out of the club early on Friday morning they came across a travelling circus that was in town and had pegged itself down for the night. Being the party animals that they are, the French kids decided to break into the circus and kidnap an 8 year old llama named Serge for a night on the town.

One of the French kids known as Mathieu explained the decision to bust the llama out of the circus: ‘[We] love animals; it walked it with us as a good dog would have done.’ Clearly, a lot of thought went into this operation. Once they had Serge with them, they took him to the Blossoms A Flot train station and took him for a ride on the subway.

Although the station agent was called in to deal with complaints that there was a llama on the train, the youths somehow managed to get off the train and board another one – despite the fact they were carrying a huge llama around with them!? – but were eventually arrested at the Place de la Comedie station and the llama was returned to its owners.

The students made a couple of videos and took a few pictures of the llama hanging out with them on its wild night in the city, you can check those out below. Make sure you read what we’ve got to say on the next page too because there’s a strange twist that ends this story.