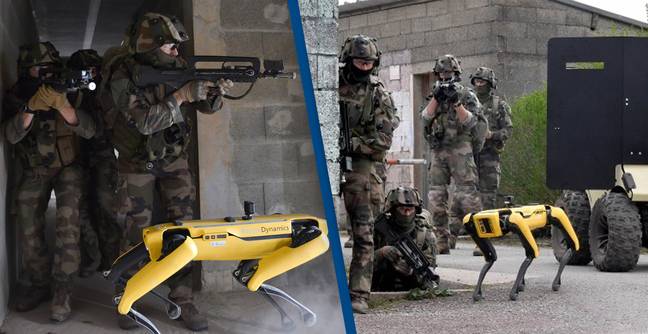 ‘Black Mirror’ can be kind of hit or miss, but one of the scariest episodes is definitely the one where that robot dog is chasing that dude, so I was obviously pretty terrified to see that Boston Dynamics had made a similar prototype a couple of years ago.

I’m clearly now even more scared after the French army decided to deploy a couple of them on a two day training exercise at France’s military school École Spéciale Militaire de Saint-Cyr. Thankfully it looks as though the dogs were only used for reconnaissance, but even so it can’t be long until someone mounts a gun on one of them or just uses them to straight up attack people, right? Or even worse that they go all SkyNet on us and get their AI sorted out and just decide to kill all humans?

Even more worryingly though, it seems as though Boston Dynamics weren’t actually aware that the robot dogs were being used by the French military as vice president of business development Michael Perry explained to The Verge:

The robot had been supplied by our European distributor, Shark Robotics and we haven’t been  notified about this particular use.

We’re learning about it as you are,.

We’re not clear on the exact scope of this engagement.

We were aware that the robots were being used by the French government and their military though.

That’s kind of a nothing statement isn’t it? Why do they even need to know about the specifics – it’s fairly obvious what they’re going to be used for if they’re in the military isn’t it? Really weird to say that they didn’t know about it, but then simultaneously say that they knew they were used by the military in the next sentence. Not sure what he’s trying to achieve there.

Anyway, there is a bit of good news to come from all this and that’s that one of the soldiers reported that the robot ran out of battery during the operation and had to be removed from the scenario, so it’s good to know that if you can run away from it for long enough then it will just run out of juice. At least for the time being.

I suppose on another note we should mention that one soldier also mentioned that on a particular operation without the robot dog he was killed, but when it was replayed and performed with the dog performing some reconnaissance he ended up surviving, so I guess they do have their uses as well. I just find it hard to believe that they won’t be turned into killing machines at some point.

For more of the same, check out this real dog having a fight with a robot dog. Only one winner.