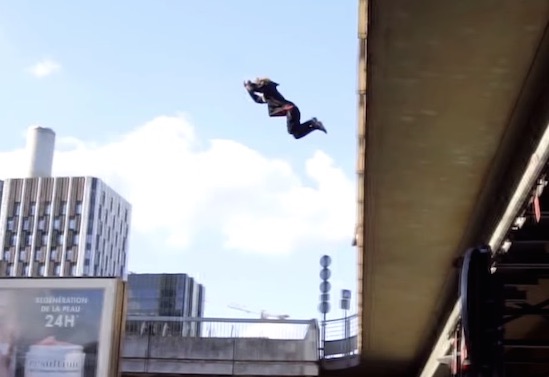 This is an absolutely insane jump.

The thing about free runners is that most of the time they’re absolutely safe and know that they’re going to make most of their ridiculous jumps and stunts and there’s absolutely nothing to worry about – it’s when they’re not though that their videos are even more spectacular.

Take this next video as an example. I’ve no idea who the guy in it is but there’s absolutely no way he should even be contemplating making this jump. It’s from a bridge onto the top of one of those advertising boards and it is way, way too far away for him to be making.

Nevertheless, the guy manages to conquer his fears and make it from a standing jump off the edge of the bridge. Pretty impressive stuff:

Kid looks completely buzzing after nailing that one when he’s running off. Can’t really blame him either because it’s a completely nuts jump. He said afterwards it was his favourite one so far because he felt like he overcame a mental block in order to do it. No shit.

For more free running jumps, check out this guy shattering his hip into a million pieces when he doesn’t quite make his jump. Be careful.