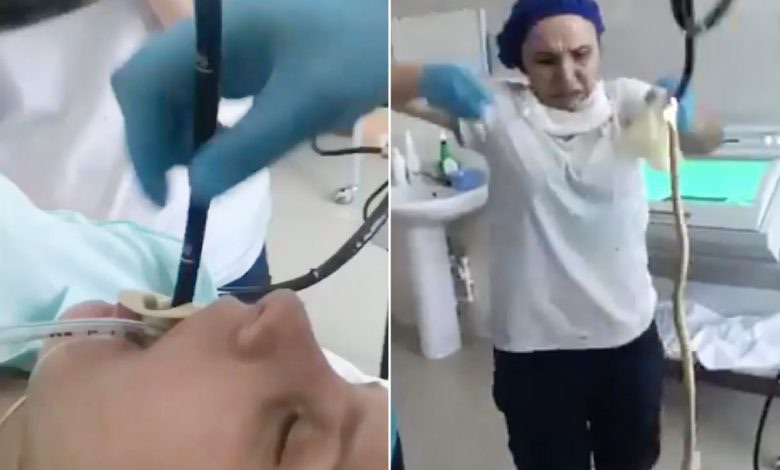 However crappy you think your life might be, you can always be happy that you don’t live in a location where a four foot long snake might end up crawling into your throat whilst you’re sleeping and getting stuck there. That’s not something that I ever want to have happen to me.

Sadly though, it is something that can happen to some people in the world and this is proven by the video below which allegedly comes from Dagestan. I say allegedly because The Sun haven’t been able to verify its authenticity (not sure what we should make of that) and because Dagestan authorities and the chief physician of the main hospital in the country have denied all knowledge of it going down on their watch.

Nevertheless, the fact remains that video of this four foot snake being pulled out of this woman’s mouth does exist so it has to have happened somewhere. Apparently, the woman was sleeping in her front yard when the snake made its move.

She awoke feeling unwell and was placed under general anaesthetic and the local hospital, where a doctor sticks a tube down her throat and pulls out a four foot long snake. It’s as rank as it sound so if that sounds like something that’s gonna freak you out then I would suggest not clicking play:

Yuck. I never even wanna think about the possibility of a four foot snake squirming around inside my stomach, but sadly that is probably all that the woman in that video is going to be thinking about for the rest of her life now. At least they got it out fairly quickly I suppose.

For more of the same, check out this video of a snake regurgitating another live snake. Too much.