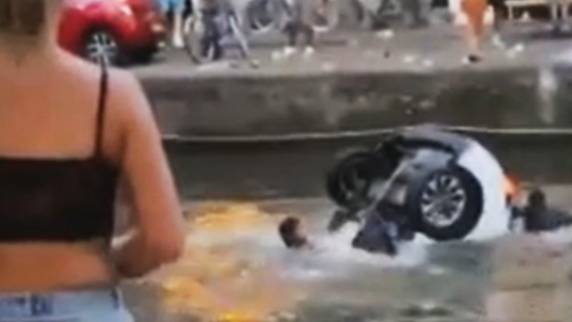 Now that we’re out of lockdown and can kinda go on holiday without feeling too bad about the consequences, it seems like us Brits are wasting no time whatsoever by coming out with the usual embarrassing holiday videos.

The latest one sees a bunch of Brits driving their car into Oudezijds Voorburgwal canal in Amsterdam’s Red Light District a couple of nights ago after they allegedly smoked a load of weed and inhaled a bunch of nitrous oxide/hippy crack. Fortunately, nobody was hurt but about eight people had to dive into the canal to help them out and apparently one of them was so panicked that he almost drowned one of the rescuers along with himself. Classic Brits abroad.

Here’s what a couple of eye witnesses said:

I saw the police removing the empty laughing gas containers from the wreckage.

They’d been in the car for several hours before.

One of them nearly drowned because he was so high.

He appeared to not be able to swim well and was completely stressed.

Sounds like a great holiday doesn’t it? Drive all the way to Amsterdam and then sit in a car for hours doing balloons and smoking weed before eventually rolling your vehicle into the canal. Trip of a lifetime.

The car was eventually able to be fished from the river by the emergency services, but no updates have been given about those inside. Hope they’re OK and finishing off their holiday by actually taking advantage of the fact they’re in Amsterdam. Prob be stuck in a brothel for the rest of the time I imagine.

For more of the same, check out this fight between two drunk Brits refusing to wear a mask on a plane. Typical.