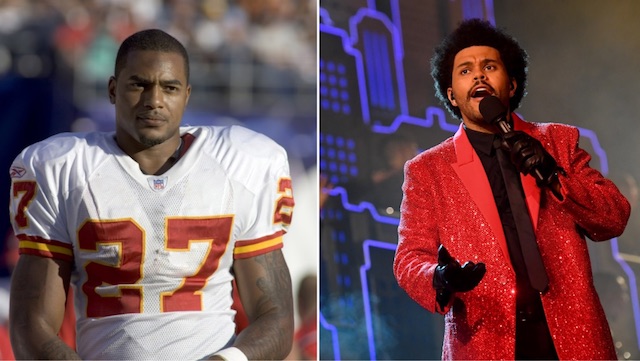 I don’t think that anyone out there is going to deny that The Weeknds’s halftime show at The Superbowl was pretty goddamn weird with all those guys running around in sharp suits with bandages all over their faces, but I think most of us would stop short at claiming that it was a Satanic ritual though.

Not former Kansas City Chiefs running back Larry Johnson though, who decided to take to Twitter to share the following nonsense about it being some kind of religious symbolism. Take a look below and see what you think:

It’s like they know the Bible well enough to tell you what parts they enter in at and they stop just before the part where they lose. Haha.

Yeah, not sure if I’m buying that, mainly because of the unhinged way that he’s chosen to prevent the information, but also because apparently he has a reputation for this kind of thing. I’ve never heard of the guy – he was a big deal in the NFL in the past though – and he’s already accused the NFL of being scripted, Kobe Bryant and LeBron James of committing a blood sacrifice to win a championship and Tom Brady of being in the occult as well.

Whilst some of those sound more likely than others, I’m pretty sure we can chalk of these theories up to the mind of a paranoid mad man. Should be fun to see what he comes up with next after all of this – just as long as none of the crack jobs out there take him too seriously.

For more of the same, check out five completely weird things that were done in the name of Satan. The Weeknd’s halftime show isn’t one of them.