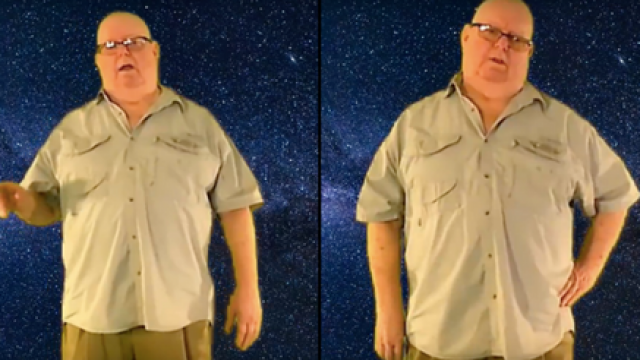 There’s been a recent influx of videos of complete weirdos claiming that they’re time travellers and making other bizarre claims in the past couple of months, and it doesn’t look like this trend is showing any signs of slowing down with the emergence of the following video.

This time we’re treated to a 12 minute rant from a man who looks like the kind of guy who says he’s going on a jungle expedition and buys all the equipment and outfits for it, but then just walks around in it all the time and never actually goes on the trip. For some reason, he’s speaking in front of a projected background of stars – presumably to add more weight and credibility to his story – and tells us about the time that he was abducted in the middle of the night by the men in black, taken to Area 51, and then told that he been brought in for a very special mission: to be the first person to pilot a new aircraft that they had reverse engineered from the wreckage from the 1947 Roswell crash.

What a responsibility. Anyway you can watch the whole story below for 12 minutes if you want, or read a much briefer summary of what ended up happening below the video:

I managed to get the aircraft to 500 feet, but once it reached that height it started plummeting to the ground. I blacked out.

I woke up in a hospital bed with both of my legs shattered.

I was told that the plane had disappeared moments before it hit the ground by another one of the men in black.

Then, some hours later it reappeared and crashed into the ground in the exact same spot.

That was how I shattered my legs.

They believed that it was some kind of time travel.

Well, that’s certainly a believable story isn’t it, made all the more believable by the high production video that this guy has bothered to record. Honestly what is that sound effect on his voice all about – even the most inept dad out there could probably figure out a way to record themselves properly these days.

Anyway, despite all of his warnings about how the government is going to come after him for releasing this video, I’m not really that worried about his safety. Yeah, I clearly don’t believe him, sorry. Entertaining 12 minute rant though sure – just try and sort the sound quality out for the next one, yeah?

For more of the same, here’s a time traveller from the year 5000. Believable.