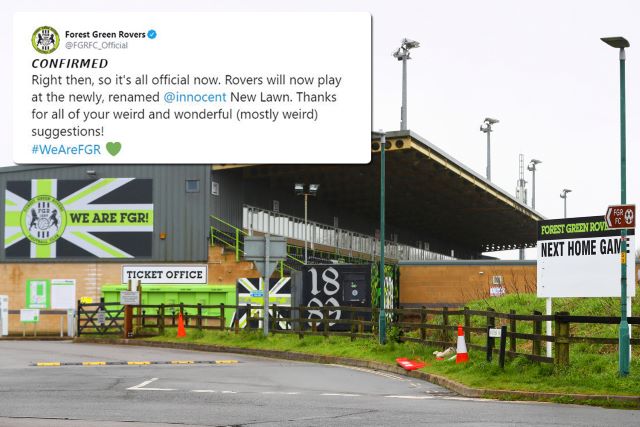 Forest Green Rovers have decided to ignore the results of a supporter poll where fans voted to name the new stadium – after the winning entry was ‘Kevin’.

Fans of the League Two side were disappointed after sponsor Innocent Smoothies revealed they definitely won’t be naming the stadium ‘Kevin’, despite the fact 65% of the club’s Twitter poll voters chose the name.

The fruit drinks makers decided to opt for the more conventional choice of Innocent New Lawn as the ground’s name instead. Boring!

Sorry if you hoped the stadium would be called Kevin. Perhaps Forest Green and @innocent will do “Kevin’s Go Free” game when fans are allowed back in? https://t.co/LNHmLGscMZ

You would think this was the first time Forest Green Rovers had ever heard of the internet or something. I mean you cannot expect to run a Twitter poll asking the internet to name your stadium and not have the result be an absolute pisstake of Boaty McBoatface proportions. That’s just what the internet does. It turns anything and everything into one big fat joke.

Having said that, you cannot ignore the results of a democratic poll and refuse to acknowledge the winner like this. Innocent New Lawn? I don’t think so. Forest Green Rovers’ new stadium is officially known as Kevin as far as we’re concerned. You can’t pretend it isn’t just because you don’t like the name Kevin. Kevin Stadium – come on, you have to admit, it has a nice ring to it.

For the time a Sheffield United fan broke into Sheffield Wednesday’s stadium and took a big, steaming shit in the middle of the pitch, click HERE. Classic football banter.