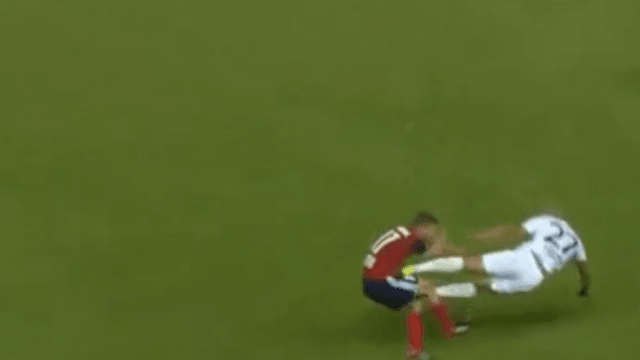 The World Cup might be over, but for some teams their seasons have already began as the long road to Champion’s League qualification begins.

Some of the preliminary qualifying rounds are being played this week and these are usually non events unless you happen to support the teams involved, but this highlight from the game between Dudelange and Videoton (nope, I dunno either) got us interested in them for once. It features a guy called Bryan Melisse performing one of the best fouls that you will ever see ever on his opponent, literally blasting a ball away from him and instead of putting his leg down like a normal player, bringing his other one up and slamming them both into the chest/groin of the guy coming up against him.

It really is something else:

“Got the ball ref”

Watch this challenge from yesterday by Bryan Melisse of F91 Dudelange pic.twitter.com/xXpuvGzWt2

Yeowch. Never seen anything like that before and in fairness to Melisse he pretty much realises he’s screwed up straight away and doesn’t hang around on the pitch protesting. He’s just like ‘yeah I’m hard, don’t mess see you later’. I guess he wanted to leave his mark on the tournament because Dudelange were heading out of it after losing 3-2.

Fair play to the guy – his actions will probably always be remembered even if his name isn’t. Gotta respect his commitment to history. If things don’t work out for him at Dudelange maybe he could always give it a shot in the WWE. Stranger things have happened.

For more nightmare football fouls, check out this. Nerves of steel.