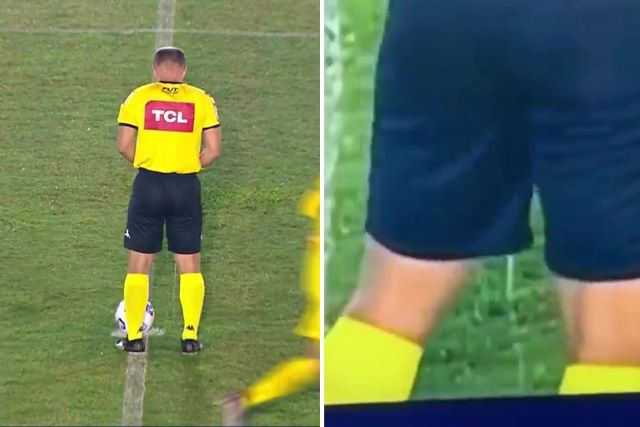 A referee over in Brazil bizarrely decided to piss his pants in the middle of the pitch moments before the start of a cup match on live TV.

Denis da Silva Ribeiro Serafim opened the floodgates and let the urine flow without even bothering to pull his shorts down:

He did it so discreetly that the commentators didn’t even realise what was happening as they introduced the match official and two linesmen before the start of the Copa do Brasil meeting between Boavista and Goias. But of course, viewers saw exactly what was happening and the clip soon went viral.

So what the hell happened exactly? My guess is that the referee got a very sudden urge to pee, but as this was an important cup game and they were moments away from kickoff, he would’ve looked silly delaying the start of the match just so he could run off and take a piss in privacy. He was literally left with one option and that was the option he took – piss his pants on live TV and hope nobody notices. Well, he accomplished the first part so fair play to him on that. If only ‘taking the knee’ was a thing in Brazil maybe he could have been more discreet about it, but alas. In any case – that’s a referee on his job right there. Can’t see Mike Dean doing the same during an FA Cup tie, can you?

For the rugby player who received a red card after lifting the referee above his head like Simba, click HERE. Worth it.