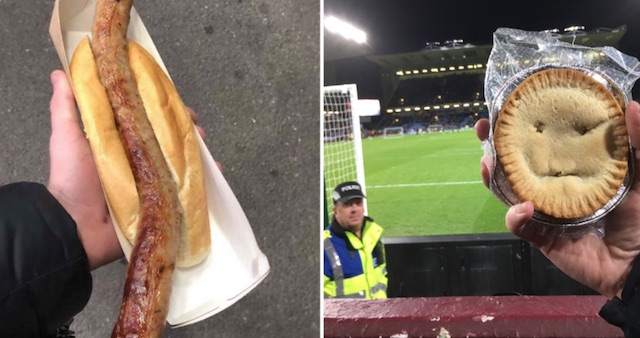 Some of these are so bad.

I’m not sure about you, but whenever I go to a football match I pretty much make sure that I avoid any of the culinary options because a) it usually takes absolutely ages to get anywhere near the front of the queue so you end up missing a lot of the game if you want to get anything and b) it’s absolutely rank and not worth waiting or even paying for.

That’s an almost universal truth and these assumptions have pretty much been proven correct thanks to a recent Twitter thread where football fans have been sharing the worst food that they’ve eaten at stadiums all over the country/world. There really are some treats in here:

What’s the worst food you have had at a football match? Here’s mine. pic.twitter.com/z9E9lHygKm

Wouldn’t say it was the worst but the bun to sausage ration was weird. Bought at Düsseldorf v Wolfsburg. pic.twitter.com/PUv6cDPses

I was offered this in the Executive Box at Goodison Park pic.twitter.com/8bq4FLuFmM

I prefer the look of your sausage to this specimen I had at Swansea pic.twitter.com/S3ZOPIYnRu

To be honest I find most of that fairly standard and not that surprising or rank – it’s food at or outside a football stadium, it’s always going to be completely awful isn’t it?

Having said that though, that offering at Goodison Park in an executive box of all places really is something else. I’m struggling to even fathom what it’s supposed to be? A frozen ring of spaghetti hoops with some super budget looking cut up sausage on top? Why would anyone serve that to anyone, let alone in an executive box? Reeks of Everton to be fair I suppose. Shout out to the turd salad at Stevenage too, obviously.

For more of the same, check out this pie that we said was the worst meal ever served at a football ground a few years ago. Seems like that’s up for debate now after these monstrosities have come to light.