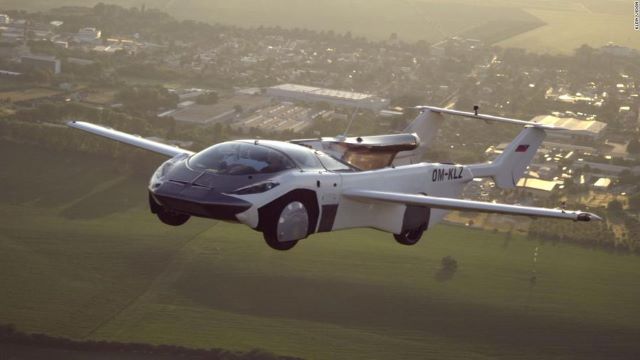 We’ve always known that flying cars are an inevitability on this planet of ours, and it looks as though it may finally be coming into fruition if this footage is anything to by.

As covered by CNN, Klein Vision’s AirCar flew between Nitra and the capital Bratislava in Slovakia this week, spending 35 minutes airborne with no hiccups. Here are some more details…

The AirCar Prototype 1 is powered by a 160 horsepower BMW engine, and comes equipped with a fixed propeller. It transforms from aircraft to road vehicle in less than three minutes.

It has now completed more than 40 hours of test flights, according to Klein Vision, including flying at 8,200 feet and reaching a maximum cruising speed of 190 kilometers per hour (118 miles per hour).

Wow, very cool. Although I guess if you still need a runway to take off and land then it’s really just a car-shaped airplane, but still, we’ve got to start somewhere. And it’s a good thing we have started since flying cars really should have been a reality years ago. Just way too many cars on the roads these days, not to mention shitty drivers. We now have a simple solution – just put your car in the air and fly over them.

Not that we’re smart or responsible enough as a species to just let any Tom, Dick and Harry fly through the sky like this, but as I say, it’s a start. Now all we need to hear are some details about the interior. Heated seats maybe? I’m guessing it gets pretty damn cold flying through the air in eastern Europe. Either way it’s an exciting time.

To watch a man survive a car bomb explosion in a failed assassination attempt, click HERE. How is that even possible?