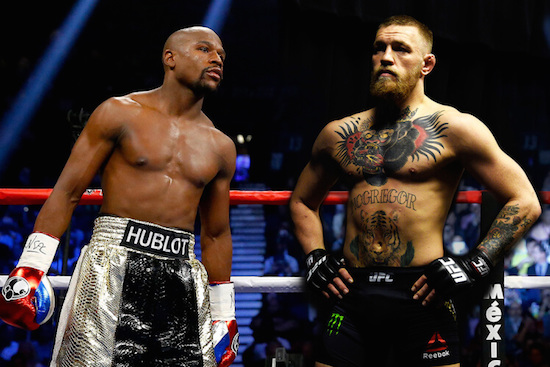 Rumours of the Conor McGregor/Floyd Mayweather super fight have been droning on for absolutely ages, but it looks like it might be further along to happening than you might have thought.

Mayweather is currently in the UK on a promotional tour when he decided to go on the rant you can see below and actively implored people to put it on the internet and share it. You can watch the whole six minutes of it below, or just read the important stuff underneath the video:

I want y’all to record this, put this on the internet.

When I faced Arturo Gatti, I went to his turf, he was the A-side, I was the B-side.

When I faced Oscar De La Hoya, he was the A-side, I was the B-side.

Fight me in June if you want to fight, sign the paperwork.

I don’t want to hear no more excuses about the money, about the UFC. Sign the paper with the UFC so you can fight me in June.

Wow. Sounds like he’s pretty serious, so do you think that this actually might happen? The main sticking point seems to be the fact that the UFC don’t want McGregor to fight in a boxing match, but given how much money is on the table you would surely think that there was some way a compromise could be reached on that?

Here’s hoping anyway and this finally happens come June 10th, which is apparently the date that the T-Mobile Arena in Vegas is setting aside for it. Can’t come soon enough.

To see who Nate Diaz thinks is going to win in a fight between Conor and Floyd, click here. Kinda surprising analysis.