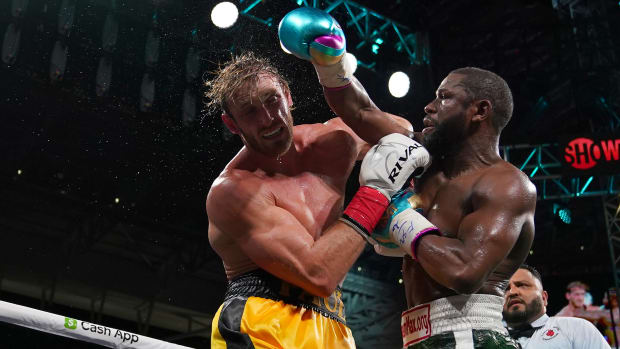 ‘When it comes to legalised bank robberies, I’m the best.’

Apparently a whole bunch idiots actually paid $50 or the equivalent to watch a 44 year old Floyd Mayweather take on YouTube star Logan Paul in a boxing match last night and most people were disappointed as nobody ended up getting knocked out and the majority of the fight was taken up by the two men hugging each other in the middle of the ring. Can’t say we didn’t warn you.

Anyway, Floyd Mayweather doesn’t really give a shit that he conned the entire world with this fight as he’s set to make anywhere from $50-100 million from the fight and he wasn’t afraid to let everyone know this either, saying the following in the post match press conference:

Floyd Mayweather “When it comes to legalized bank robbing, I’m the best” pic.twitter.com/xbwYFjplXr

When it comes to legalized bank robbery, I’m the best. I changed my name from “Pretty Boy Floyd” to “Money Mayweather” and I started making money straight away.

I’m somehwere in Aruba. in the Bahamas, in Dubai, I’m traveling the world on my jet, making millions every month, not worried about nothing and then when I see there’s a chance for me to do a heist, a quick heist, I’m going to let you all know this.

Y’all can say what you want to say.

At the end of day, I’m the smart one because I don’t care if you write good about me, you write bad about me, just keep writing about me.

Ya’ll are keeping my name out there.

He isn’t wrong is he? And people are still falling for his crap and making him even richer all these years later.

Can’t wait to see who he fights next after this garbage. Maybe Donald Trump or Fred Durst? Wait and see, but you know he’ll be raking it in whatever happens. That’s just how he does.

For more of the same, check out what Floyd Mayweather’s new girlfriend’s family thinks of their relationship. They’re not happy, let’s put it that way.