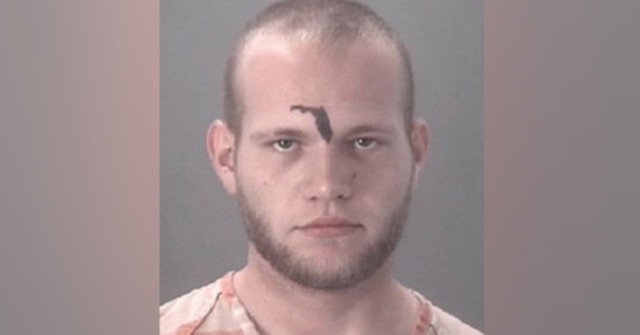 We’ve covered some scarcely believable stories here at Sick Chirpse over the years, but this one really does seem like somebody made it up – thankfully we’ve got the mugshots to prove it though.

We’re in Florida for this one where we come across perhaps the most Florida man of all time in Matthew Leatham, who loves the Sunshine State so much that he’s got its outline tattooed on his forehead right between his eyes. What a hero.

Anyway, you might not believe it but with a tag like that, 22 year old Leatham was up to no good on Sunday night/Monday morning when bizarrely he called 911 at 4:20 am to see if they would give him a ride home from Port Richey, a suburb 40 miles northwest of Tampa. After they declined the first time, Leatham called them again and they kindly offered to order a taxi for him, but Leatham didn’t want to take them up on that idea either.

A Florida man left little doubt behind that he was a Florida man — it was written all over his face. https://t.co/lNEH4c2Eb6

After he called them a third time, the police sent someone to pick him up and found a small amount of marijuana on him. He was therefore arrested at around 4:20 am for possession of marijuana and misuse of calling 911. You couldn’t make it up.

Kinda feel sorry for him – he was just trying to get a ride home, but then you have to be next level out of your mind to call the police in America to try and get that, even if you do have your state tattooed to your forehead like some kind of patriot. Only gonna end in trouble no matter who you are. Don’t think the tattoo is the Get Out Of Jail Free Card that Matthew may have thought it was when he got it. At least it should help him pick up chicks though.

For more of the same, check out everything weird that has happened in Florida over the years. Some of it you literally won’t believe.