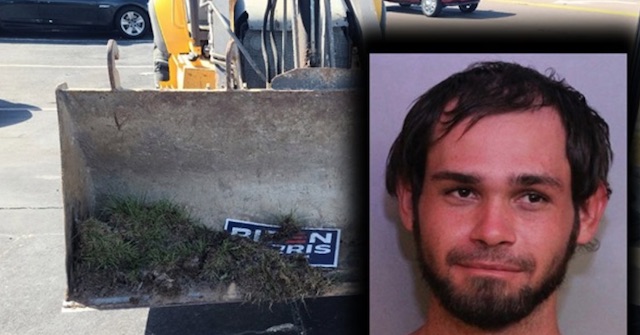 The battle is on.

Election fever is heating up over in the USA with less than a week to go until the big day and Florida is once again set to be one of the key battlegrounds, so it’s only fitting that we see some Florida men go absolutely crazy in the build up to it.

The first of these is 26 year old James Blight, who had clearly had enough of all the political signs in people’s front yards and decided to take matters into his own hands, stealing a bulldozer and then mowing down all the Joe Biden signs he could see in Haines City, Florida. His most prominent victim was the vice mayor of the city Adam Burgess, who said the following about his attack:

This man came onto my property, took the two Joe Biden signs I had in my yard and them came back with a bulldozer to run down my fence.

Bit extreme with mowing down the guy’s fence there Blight! When he was arrested, Blight claimed that he had been drinking whiskey all day and didn’t have any memory of what he had been doing, also saying that he had no idea how to operate a bulldozer. That sounds like a plausible thing that would happen in Florida, sure.

However, Haines City police men are disputing this fact as they’re saying that Blight didn’t appear even slightly drunk when he was arrested – to the extent that they didn’t even bother performing a field sobriety test on him. Kinda feel that someone who had been drinking whiskey all day would be a bit more noticeable if you know what I mean, although it’s probably uncertain whether we can actually trust the Florida cops as well on this one. Could easily be massive Trump fans who wanted the Biden signs taken out.

Blight was charged with trespassing on a construction site, grand theft and criminal mischief of $1,000 or more. Hopefully he goes down because whatever your political affliction you shouldn’t be getting your property destroyed because of it. He could also have really hurt someone in that bulldozer if he really didn’t know how to use it. Idiot.

For more of the same, check out this interview with four Florida men explaining how they spent their lockdown. Very strange behaviour.