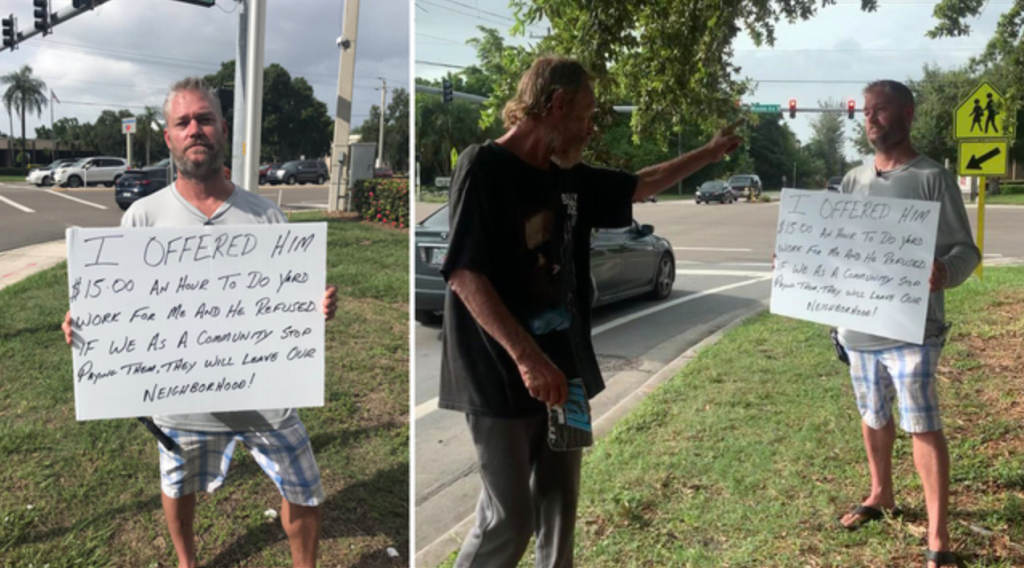 ‘“I offered him $15.00 an hour to do yard work for me and he refused. If we as a community stop paying them, they will leave our neighborhood!’

You can pretty much always guarantee that whenever you hear about someone doing something in Florida that it’s going to be completely and utterly ridiculous and this story is no exception.

We’re in the small town of Bradenton, where the heights of pettiness seemingly know no boundaries. A man named Robin Bray was seemingly so insulted by a homeless man named Alabama’s refusal to do his yard work for him for $15 an hour, that he decided to take to the streets with his own sign and follow him around to ensure that nobody gave the homeless man any money.  The sign read as follows:

If we as a community stop paying them, they will leave our neighborhood!

Wow. Bray does perhaps have slightly more of a reason for his stalking of Alabama though, saying that Alabama threatened to rape his mother and kill his wife when he refused to give him any money after Alabama turned down his job offer. That might rankle for a little bit sure, but probably not enough to actively follow this idiot around for hours upon end to discourage him people from giving him money – that’s just crazy behaviour.

On his part, Alabama contests the whole story, claiming that none of it ever happened:

He didn’t offer me nothing, buddy. I never had no trouble until this dude shows up.

Just because he’s got money don’t mean as homeless people we don’t have rights.

Yeah I’m not sure if anyone is buying that Bray is just doing this for a lol and that you didn’t do anything to provoke him Alabama, but props for trying sure. Not sure if anyone is on your side here, but Bray’s actions are even more petty and ridiculous. How long is he hoping to keep this up for? Doesn’t he have anything better to do than just spite Alabama? Fucking Florida man.

For more of the same, check out all these stories about Florida. Each one dumber than the last.