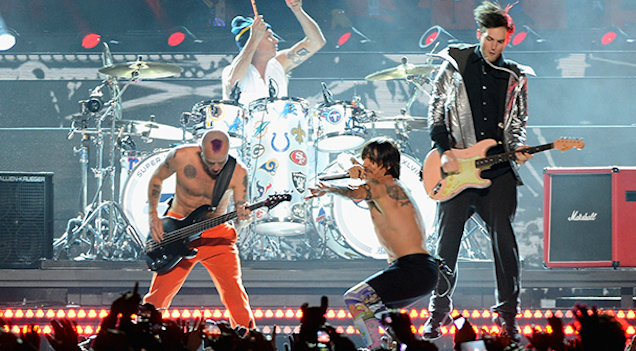 He’s also produced a thoughtful and heartfelt letter detailing their thoughts behind making this decision – check it out here.

A whole load of people have got completely butthurt over the last few days moaning about the fact that it was quite clear that the Red Hot Chili Peppers weren’t playing live at the SuperBowl on Sunday, which was pretty obvious by the fact that Flea’s bass wasn’t plugged in and neither was whoever the hell is playing guitar for them now’s guitar.

Whilst there’s no real reason to get upset about this – I mean if you got offered the chance to play the SuperBowl halftime show (arguably the biggest show in the world) but had to mime because you literally can’t set up a sound rig for it in five minutes, would you turn it down? WOULD YOU REALLY? – it still created quite the stir on the internet with thousands of people who have played in shitty dive bar bands all their lives berating the Chili’s lack of professionalism, love of the big buck (even though no artist has ever been paid for performing at the SuperBowl halftime show) and ultimately their sell out attitudes.

To which point, Flea decided to provide a wonderfully eloquent and detailed description of the thought process behind their decision to mime at the event which hopefully anyone with a brain will appreciate. Whilst the Chili Peppers are by no means my favourite band, props to Flea for coming out and offering this explanation as he certainly didn’t have to, and I guess props to them for being asked to play the halftime show as it’s a privilege that very few people will ever be offered:

When we were asked by the NFL and Bruno to play our song Give It Away at the Super Bowl, it was made clear to us that the vocals would be live, but the bass, drums, and guitar would be pre-recorded. I understand the NFL’s stance on this, given they only have a few minutes to set up the stage, there a zillion things that could go wrong and ruin the sound for the folks watching in the stadium and the t.v. viewers. There was not any room for argument on this, the NFL does not want to risk their show being botched by bad sound, period.

The Red Hot Chili Peppers stance on any sort of miming has been that we will absolutely not do it. The last time we did it (or tried to) was in the late 80’s, we were thrown off of ‘The Top Of the Pops’ television program in the U.K. during rehearsals because we refused to mime properly, I played bass with my shoe, John played guitar atop Anthony’s shoulders, and we basically had a wrestling match onstage, making a mockery of the idea that it was a real live performance.

We mimed on one or two weird MTV shows before that and it always was a drag. We take our music playing seriously, it is a sacred thing for us, and anyone who has ever seen us in concert (like the night before the Super Bowl at the Barclays Center), knows that we play from our heart, we improvise spontaneously, take musical risks, and sweat blood at every show. We have been on the road for 31 years doing it. 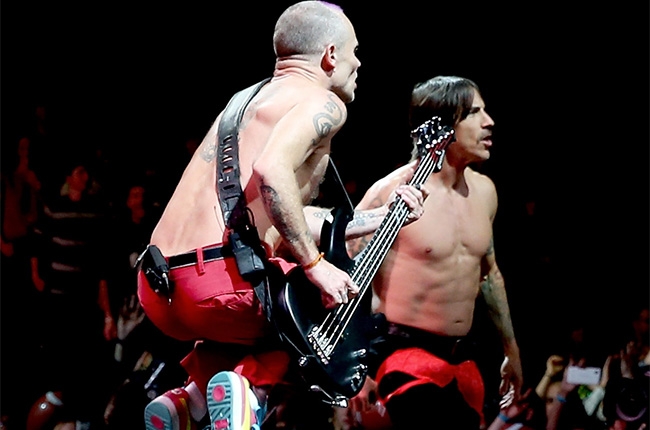 So, when this Super Bowl gig concept came up, there was a lot of confusion amongst us as whether or not we should do it, but we eventually decided, it was a surreal-like, once in a life time crazy thing to do and we would just have fun and do it. We had given this a lot of thought before agreeing to do it, and besides many a long conversation amongst ourselves, I spoke with many musician friends for whom I have the utmost respect, and they all said they would do it if asked, that it was a wild trippy thing to do, what the hell. Plus, we the RHCP all love football too and that played a big part in our decision. We decided that, with Anthony singing live, that we could still bring the spirit and freedom of what we do into the performance, and of course we played every note in the recording specially for the gig. I met and spoke with Bruno, who was a beautiful dude, a real talented musician, and we worked out something that seemed like it would be fun.

We recorded a track for the day, just banged one out from our hearts that was very like in spirit to the versions we have been playing live the last few years with our beloved Josh on guitar.

For the actual performance, Josh, Chad, and I were playing along with the pre recorded track so there was no need to plug in our guitars, so we did not. Could we have plugged them in and avoided bumming people out who have expressed disappointment that the instrumental track was pre recorded? Of course easily we could have and this would be a non-issue. We thought it better to not pretend. It seemed like the realest thing to do in the circumstance. It was like making a music video in front of a gazillion people, except with live vocals, and only one chance to rock it. Our only thought was to bring the spirit of who we are to the people.

I am grateful to the NFL for having us. And I am grateful to Bruno, who is a super talented young man for inviting us to be a part of his gig. I would do it all the same way again.

We, as a band, aspire to grow as musicians and songwriters, and to continue to play our guts out live onstage for anyone who wants to get their brains blown out.