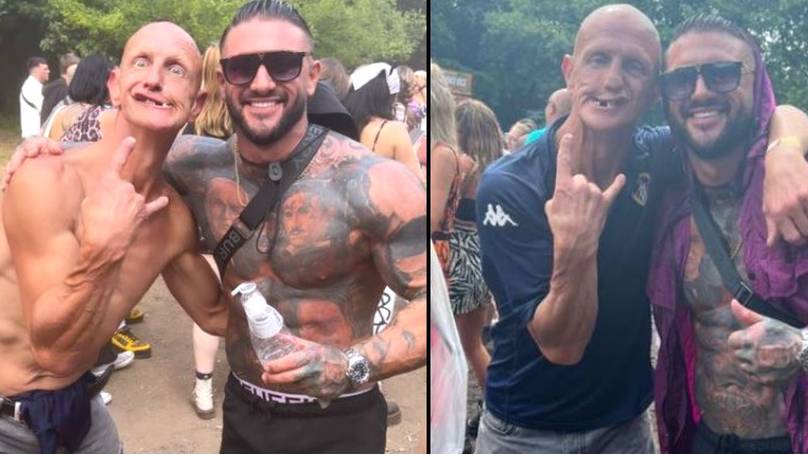 There’s something so great about seeing two internet memes meet up in the wild to prove that they’re both real and it happened again over the weekend where Fish And Rice Cake Man and Gurning Rave Guy ran into each other at a festival and sensed a photo opportunity.

In case you’re unfamiliar – not sure why you would have clicked on the article in that case though? – then Fish And Rice Cake guy shot to viral fame back in 2007 after he appeared on BBC Three documentary ‘Baby Faced Bodybuilders’ talking about how he literally ate fish and rice cakes about seven times a day every day. On the other hand, ‘Gurning Rave Guy’ crashed the internet back in 2015 when he was featured in a promo video for a rave night club called ‘Bounce By The Ounce’ in Preston and you could see him actively chewing his face off.

Whilst Fish And Rice Cake Guy seems to have aged rather gracefully and kept up his training, the same can’t be said of Gurning Rave Guy who looks even more spangled then he did seven years ago:

Jokes. Kinda annoying they didn’t post what festival it was – I don’t think it looks like Glastonbury – as it would be great to know what kind of an event that these two frequented on the reg. Imagine the extra amount of people that would show up just to catch a glimpse! Surprising that there weren’t more people jumping on them and screaming in the photograph to be honest.

Let’s hope those two members of internet royalty keep up the good work. Until next time.

For more of the same, check out when Fish And Rice Cakes guy was on First Dates Manchester. Something else.