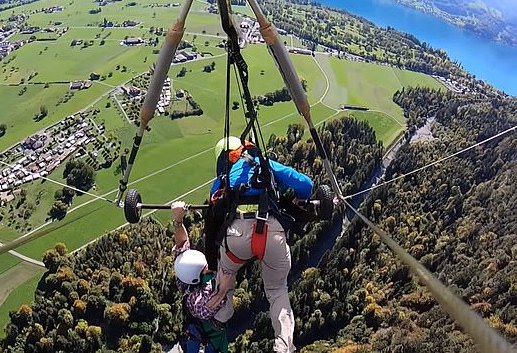 One of the scariest things I’ve ever seen.

I’ve never been hang gliding and I’m fairly sure if I did then I would be holding on for dear life the whole time even though I was attached to the glider because I’m shit scared of heights, but I don’t think I would actually be able to hold on for dear life if it came down to it.

Unfortunately though, this is exactly what Chris Gursky had to deal with on his first ever hang gliding trip in Switzerland recently. The idiot instructor forgot to attach him to the glider and so he was forced to literally hold on for his life or plummet 4000 feet to his death.

The whole ordeal lasted for three minutes and you can see a video of it below but believe me, it’s terrifying:

I remember looking down and thinking, this is it. I was losing grip with my right hand, that was holding onto a strap on the pilot’s right shoulder. He was trying to make a bee line to the landing field as he knew what the situation could bring.

The pilot grabbed my hand, but like in the movies it was a slow motion slipping of the grip until my right hand slipped off and I grabbed another strap on his left side for a bit but this slipped off also.

I ended up holding on bar with the left hand and the lower part of his leg with the right when we were nearing the ground. I looked down to see my feet hit first, which ripped me off at about 45 mph as it was a hot landing and I was under the landing gear.

Fucking hell. I don’t really get why he didn’t just let go right at the start because they were pretty close to the ground there?  I guess maybe he didn’t realise straight away he wasn’t attached but it seemed to happen really quickly and then he just went straight down the mountain. I mean I don’t know anything about hang gliding so I’m probably completely wrong but wouldn’t it have made more sense for him to go the other way and not down the mountain? Seems a bit more sensible but like I said, I don’t know anything about it.

I’m glad that Chris managed to survive though and see the funny/amazing side of his little adventure despite his injuries. I’m telling you if that happened to me I would be screwing and probably suing this guy for all he was worth. Actually I’d probably be dead because there’s no way I would be able to hold on that long, my bicep would be ripped and I would be long gone. Unbelievable props to the guy for making it through.

For more of the same, check out this freak sky diving accident from a few years ago. Man oh man.