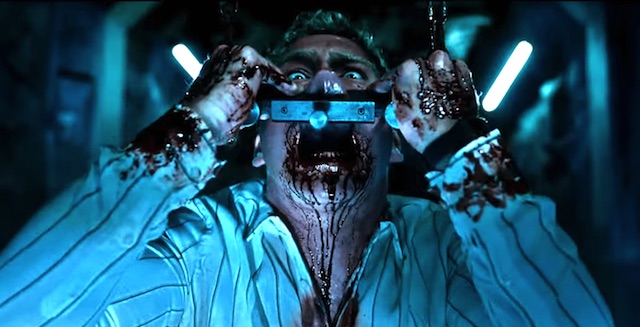 I think it’s fair to say that it’s been a very long time since anyone has been excited about a new instalment of the ‘Saw’ franchise, but there’s been a fair amount of buzz about the new ‘reimagining’ of the series that’s being released next week in ‘Spiral’ starring Chris Rock and Samuel L. Jackson.

Although it’s being billed as a ‘reboot’, long-time fans of ‘Saw’ will be pleased to see that the movie is sticking to the classic formula and opening with an absolutely brutal and disgusting game that one character will be subjected to and probably end up getting killed by. It’s probably more fun if you just watch it below than if I describe it to you, but obviously it’s very bloody with a lot of torture so don’t press play if you’re not going to be ready to deal with that:

That kinda looks exactly like every single ‘Saw’ movie ever made, so I’m not really sure what they’re talking about with this version being way different but maybe there’s more to it than they’re giving away here. I suppose the killer in the pig mask with the really lame sounding voice is at least a bit different to the old ones. Still excited about this and probably going to go and see it next week ASAP.

For more of the same, check out when the official ‘Saw’ Twitter account posted out this really weird picture last week. What the hell was all that about?