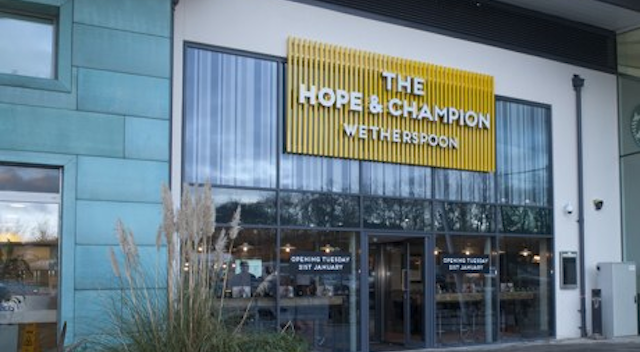 History will be made today as the first ever pub will be opened at a motorway service station.

It’s going to be a Wetherspoons (of course) and it’s called The Hope And Champion and it’s going to be located at the Extra Motorway Service Area at Junction 2 of the M40 in Beaconsfield, which is already a really nice motorway services. The Hope And Champion will be open seven days a week from 4am to 1am and somehow cost one million pounds to build, which completely blows my mind. I mean the whole thing about Wetherspoons is that it’s completely cheap so how the hell can it be so expensive to build one? It’s not like the decor is ever anything special, right?

In any case, several road safety organisations and anti-alcohol campaigners have vehemently opposed the move as they feel that it will set a dangerous precedent and increase instances of road accidents related to drunk driving. Even though I’m normally fairly liberal about these things, I’ve got to say I probably agree with this as I can’t really see there being any advantage to having a pub in a motorway services other than for people who are travelling a long way and are going to have a beer to relax which then turns into three or four and them continuing their drive half cut, which isn’t good for anyone except maybe the landlord of The Hope And Champion. I mean these are literally the only kind of customers this pub is going to get as it’s not as if it’s going to attract locals as it’s completely inaccessible except via car. Not a good idea.

The landlord of the pub – a guy name Steve Baldwin – has defended the decision to open it with the following statement, which doesn’t really offer any insight into why it was opened: ‘The Extra Motorway Service Area, now including The Hope & Champion, primarily serves the motorway users, but its facilities are also available to the surrounding community from the local road network’. Great, but like I said earlier nobody from the local community is going to drive to the service station to visit The Hope And Champion and even if they did, they would have exactly the same problem that motorway users have i.e. they would end up drinking and driving. It’s also way more likely they would just hit up a way nicer and more accessible pub in the surrounding community.

Basically I can’t really see one good thing about this happening (except maybe the Wetherspoons sharing platter – mmm mmm) and hope that it is forced to close down ASAP because nobody is going there and it isn’t making any money. Unfortunately I can’t really see that happening, but we can but hope.