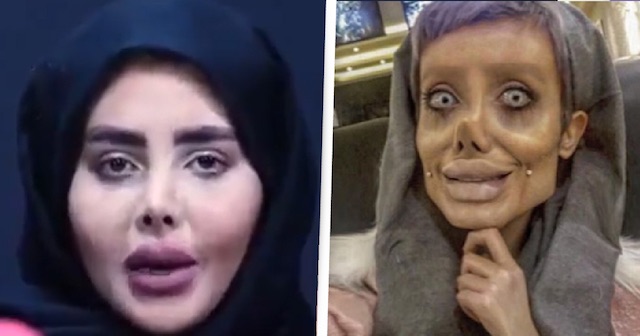 She said she’ll never have an Instagram profile ever again.

A load of viral characters seem to be appearing at the end of the year with suitably ridiculous stories that we’ve ignored because of Covid or Trump or Brexit or whatever and one of the strangest has definitely been the zombie Angelina Jolie from Iran, who was thrown in prison for ten years a couple of weeks ago for blasphemy and encouraging public indecency.

After a large public outcry though, it turns out that Sahar Tabar – or Fatemeh Khishvand if you want to use her real name – was released from prison. She then appeared on the state run television channel Rokna, where she said the following:

What you saw on Instagram was the computer effects I used to create the image.

I have wanted to be famous since [she] was a child and cyberspace seemed like an easier option than becoming an actor.

After what has happened though, I won’t even have the app on my phone, let alone have a page.

Geez. That’s kind of sad how a girl developing an online presence for herself has led to her going to jail and subsequently being so scared of what might happen to her that she deletes all her social media profiles, but I guess that just goes to show how messed up Iran is in that respect. Glad she got out of jail but how is what she did even vaguely a punishable offence over there? Scary.

For more of the same, check out when she had Coronavirus as well. Not a good year for the woman.