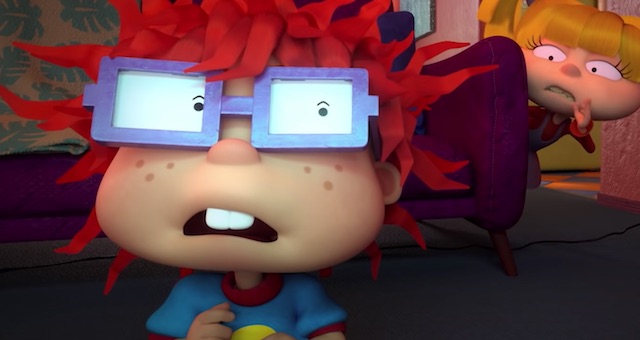 This looks kind of weird.

I think I heard a while ago that there was going to be a ‘Rugrats’ reboot coming out soon, but in all honesty I reckon I must have forgotten it because realistically I don’t think the adventures of a bunch of cartoon babies is going to hold the same fascination for me now as a guy in his mid 30s as it did when I was ten years old.

Now that the first clip of the new series is out, I think that this has been confirmed as well. Whilst I feel that the new CGI animation style works for the show and it is no doubt great hearing all their stupid little voices again – I especially love it when Tommy shouts ‘Reptar’ – the plotline about Angelika trying to trick Chucky to go and steal some candy from the pantry just isn’t really speaking to me. I just can’t really identify with it anymore you know?

Take a look below and see what you think yourself:

First footage from the ‘Rugrats’ animated series, with the original voice cast, hitting Paramount+ in 2021. pic.twitter.com/vsTlIWS96w

Yeah, I’m not really sure who they’re making this reboot for? You can see adults tuning into stuff like ‘Saved By The Bell’ as there’s a firm shot of nostalgia as all the actors are older now and riffing on what they did in the past, but with cartoons it’s literally going to be the same characters doing the exact same shit they did thirty years ago, only with weirder animation? I suppose it might be good for new parents watching with their kids as it sorta has something for both of them, but that’s all I can really think of right now?

Anyway, if that clip did get you interested then it’s going to be airing on Paramount+ at some time in the near future. No release date has been announced yet.

For more of the same, check out the details on the ‘Rugrats’ live action movie. No way?