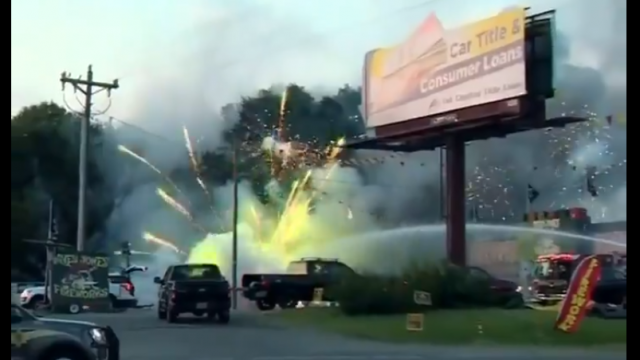 Yesterday, America celebrated its independence which meant that a whole bunch of people fired up their BBQs, drank a whole load of beers and fired off a load of fireworks into the sky. Woohoo!

Obviously this is probably one of the only times of the year when the fireworks industry is actually in demand over there and one factory decided to go above and beyond for the red white and blue in Fort Mill, South Carolina by blowing itself up. As you could probably imagine, the spectacle was quite something and we’re lucky enough that somebody actually videoed it so we can all check it out as well:

A fireworks shop has gone up in flames in South Carolina, igniting its stock and setting off a dramatic display.

Firefighters are battling a fire at Davy Jones Fireworks store on the section of Carowinds Blvd. near the store is closed. You can turn North towards Carowinds Park off Ext 90 but not south. #YCSONEWS #YOCONEWS pic.twitter.com/knAxLxMM63

I know that’s really dangerous and must be really gutting for the people that own the firework factory because they’ve lost loads of money, but isn’t it just one hell of a scene? And so perfect that it went down on the 4th of July too.

You can also feel a bit better about it because nobody was actually injured during it so it was literally just a spectacular light show. I guess it wasted 45 minutes of firefighter time and the owners lost their life savings, but at least it looked cool and went viral, right? Happy 4th of July!

For more fireworks, check out this million dollar fireworks display exploding all at once. Whoops!