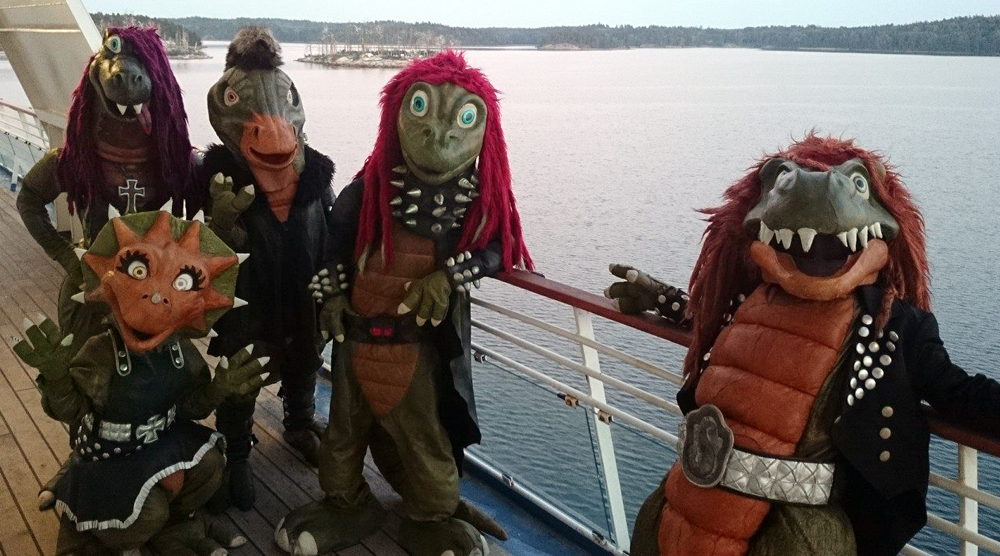 They’re a bit like a prehistoric Lordi for children and we have no idea what any of the lyrics are.

The world of kids’ music is a bit of a weird one, with it mostly consisting of either overly enthusiastic adults in brightly coloured costumes prancing about trying not to swear or immensely spoilt pre-teens who get bought an Ark Music Factory record deal by their deluded parents for their eleventh birthday, resulting in mind-rotting videos to offensively catchy autotune drivel in a similarly horrific style to Rebecca Black. Luckily some heroes in Finland decided that the children’s music scene was too heavily saturated with irritating pop tunes and decided to create a metal alternative, although for some reason they’re all dressed up as cartoon dinosaurs, presumably to attract the attention of both children and furries worldwide. Though they’ve been around since 2009, Hevisaurus are probably our new favourite rock band because they’re just so bizarre.

If we weren’t aware that the band members were real life human adults in rubber suits, we’d swear that the keytar player and female vocalist is Barney the Dinosaur’s green triceratops mate Baby Bop, just grown up a little bit and rebranded as Milli Pilli to fit in with her current greebo phase. Other prehistoric rockstars in the group include frontman Hera Hevisaurus, who we assume due to his surname is the driving force behind the group, drummer Komppi Momppi, Riffi Raffi on lead guitar and Muffi Puffi on bass. Overall they’re a bit like our other favourite Finnish band Lordi, who you may vaguely remember as being the monstrous group of creatures who rightly won Eurovision back in 2006, but with all of the Satan sucked out.

The idea behind creating a metal act to entertain little ones was born (ha!) after a guy called Pasi Rantanen attended a metal show with his mosh-inclined offspring, which we assume was rather dull if it inspired him enough to make an alternative. Rantanen himself is the singer of power metal band Thunderstone but has cameoed all over the place, even at the time Lordi smashed the rest of Europe on the usually godawful singing competition where he lurked on stage as a backing vocalist wearing a mask of Gene Simmons’ face.

Although Hevisaurus are an act marketed towards children, the rocky road to scaly stardom wasn’t without drama as the founding drummer got into a legal dispute with Sony over the trademarks of the characters. Despite this, our favourite extinct entertainers have achieved monumental success in Finland having sold over 170k album copies, with “Hirmuliskojen Yo” reaching second in the charts, and a film expected to be released sometime later this year. Fingers crossed the movie makes its way over here so that we can witness these five anthropomorphic lizards prance about onstage at the family’s annual summer trip to Butlins instead of having to sit through Dick & Dom for the fiftieth fucking time (although they are pretty jokes, no offence lads).

For your viewing pleasure, we present our three favourite Hevisaurus videos taken straight from their VEVO channel but with added commentary because we have barely any fucking clue as to what’s going on because we can’t speak Finnish. Be sure to click through to see more.

Viimeinen Mammutti opens with a small aryan child sitting at her desk and her stuffed mammoth toy has told her she’s an idiot for drawing yellow clouds but she isn’t having any of it, her work is art and the piss clouds are her vision. Either that or she’s colourblind – she probably saw that godawful dress in purple and green or something ridiculous. After she’s had enough of his criticism, the artist decides to call it a night but is rudely awakened by a grown man in a dinosaur costume who miraculously apparates through a closed window.

The stranger takes her to a cloud where Hevisaurus are playing a gig, he himself being the dreamy frontman Herra. The whole performance is a bit Stars in Their Eyes as none of the band are actually playing the instruments so the whole thing is a massive lie, they’ve woken up this poor soul to feed her and she’ll probably have nightmares now. Although the end scene is a shot of her waking up so it was obviously a nightmare all along.