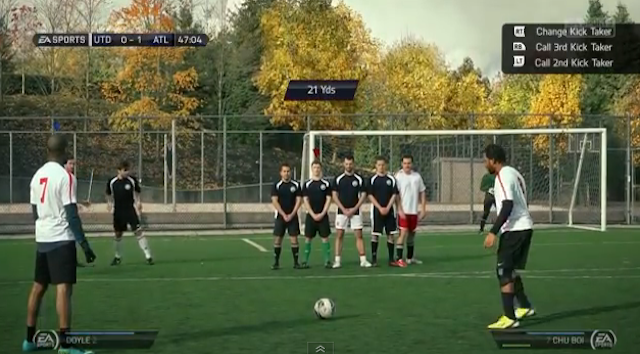 This must have taken a lot of time and effort but the results make it definitely worthwhile.

Although FIFA is pretty much universally recognised as the best football video game these days thanks to the decline of the Pro Evo series, it’s doubtful that anyone would actually say that the gameplay was realistic of actual football because – even though it’s completely sick – it’s quite slow and methodical which means you usually see the same type of goals and plays in the different matches that you take part in.

One YouTuber named MHJerpseth decided to exploit this understanding of the game and recreated a game of FIFA in real life, with no punches spared. This means the video includes Martin Tyler’s dumb commentary, player arrows, the correct camera angles and of course some of that dumb methodical play I was talking about in the opening paragraph.

And the dude pulls it off perfectly in the video. I’ve no idea how he managed to do that or how long it took him to get the perfect shots (especially the ridiculous bicycle kick in the last minute – which is probably better than the top ten bicycle kicks of all time – and the times where they hit the post) but it all looks exactly lil FIFA and should be viewed as a sick achievement from the guy. It also serves to illustrate just how unrealistic FIFA is when it’s happening in real life too, but it’s a great game so don’t let that bother you too much.