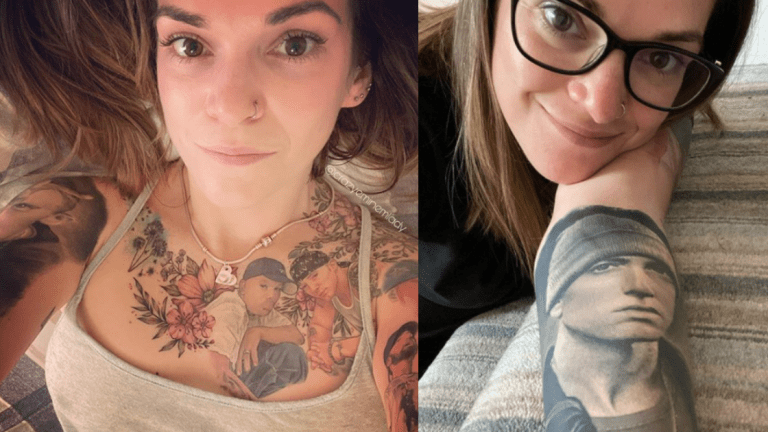 She’s got 28 tattoos of his face and many more dedicated to him.

I’ve never really understood what it’s like for someone to become so obsessed with someone else they don’t even know that they think it’s a good or normal idea to get their face tattooed on their body, but it seems to happen with some regularity so I must just be missing the boat on that one.

35 year old Aberdeen native Nikki Paterson would seem to be the authority on the subject as she recently set a Guinness World Record for the amount of tattoos of someone’s face on their body after she inked up her 28th one of Eminem. She goes by the name of ‘crazyeminemlady’ on Instagram where she spends her time sharing photographs of her Eminem tattoos. Seems healthy and mentally sound to do that and pick that as your username, doesn’t it?

Here are a few of the ‘best’ shots as well as a recent BBC video of her talking about her obsession (yes it is an obsession and it is v weird!):

Just home after a crazy long day but it was so worth it!! Added some girl power with the beautiful @skylargrey taken by @jeremydeputat in Abu Dhabi last year! Thank you so much again @davidcorden it was a wonderful 9 hours with you as always ❤️ #eminem #eminemfan #stan #femalestan #eminemtattoo #eminemtattoos #slimshady #marshallmathers

‘And to the rest of the world, God gave you the shoes That fit you, so put em on and wear ’em And be yourself man, be proud of who you are Even if it sounds corny Don’t ever let no one tell you, you ain’t beautiful’ #eminem #eminemfan #stan #femalestan #eminemtattoo #eminemtattoos #slimshady #marshallmathers #eminembeautiful

Motherfuckers talkin’ crazy, sayin’ I should quit, I fuckin’ tell them make me (bitch), eat a fuckin’ dick, I’m feelin’ like the greatest (woo), on the beat whoever did it Mike Will the one who made it, it’s Shady on the lyrics #eminem #eminemfan #stan #femalestan #eminemtattoo #eminemtattoos #inkedgirls #girlswithtattoos #tattooedgirls #inkedmag #tattoolifemagazine #tattoolife

I heard Stan when I was 14 and had never heard anything like that before,It blew me away.

The portraits began three years ago, and I loved everything about them. I adored them and had to get more.

He’s been the one constant in my life, and I have seen him perform live.

Does nobody find it ironic that she literally is the female embodimentStan and that this is the song that got her so invested in Eminem? I say literally is Stan but I suppose a more apt description would be an even more insane and obsessive 2020 version of Stan, but you get my picture. I’m being gender neutral with that description obviously as well, which is even more 2020.

Also, does anyone think it’s funny that she says she’s seen him perform live like it was some impressive achievement? I guess Eminem doesn’t come over to play that much anymore, but if I was as obsessed with an artist as to get 28 tattoos of their face on my body I bet I would be willing to hop a plane to America or wherever to go see them play live. Probably go to every UK show when they came around to be honest. Makes way more sense for me to spend my money that way than how this crazy woman is choosing to spend it, just saying.

For more of the same, check out this true story about a real life Stan breaking into Eminem’s house and coming face to face with the rapper. Only a matter of time before Nikki tries something else.