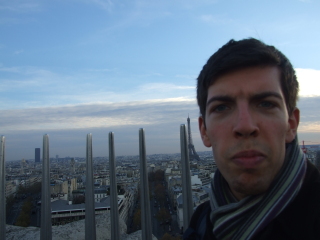 Meet Slatz, Sick Chirpse’s own idiot abroad. Here’s a story about how he gets locked in a crypt in Paris….. I’m Slatz and I’ll be writing a regular column on my ridiculous adventures in life as I try to negotiate the world.

When France defeated England at Wembley last week, the French newspaper L’Equipe described the atmosphere as “like Miss Marple’s house at tea-time”. At the same time that Capello’s boys capitulated in London; I sat sipping a cup of the stuff in a Paris bistro, surrounded by slightly smirking waiters — who  judged from my accent that I was English and from my expression that I was hardly delighted by the score-line.

I hadn’t gone to the “City of Lights” to specifically watch the match or enjoy the cordiale Gallic hospitality but for a short winter break; to experience the metropolis as it prepared for Christmas and the wonderful sights and sounds of France’s beating heart.

Upon disembarking at Gare du Nord from the Eurostar, I pulled out my Blackberry to adjust the clock to central European time and check that it had found a suitable local network to drain my credit mercilessly if I dared to make a call. But on the display; I spotted the telltale “cassette tape” icon – a voice message was waiting.

Addressing me as Mr Slater Andrew, it was the manager of the Comfort Hotel in Montmartre (the psedo-village located just north of Paris) where I had booked to stay. He informed me that due to a mistake with my reservation, where they thought I was staying in December rather than November,   they didn’t have a room for me tonight but had placed me in the nearby Timhotel for the first night.

By means of compensation, I would have free breakfast for the duration of my stay and wouldn’t have to pay anything extra to Timhotel. After being give a rough set of directions on a follow-up call to the manager, I set off down the metro to Pigalle, the station closest to my new accommodation.

Stepping up the street level, I was greeted not by the picturesque side streets and patisseries of quaint Montmartre but by a street flanked by the Museum of Eroticism and establishments called “Pigalle Peepshow” and “Sexy Store”.  A young woman gestured across the street that she wanted “a word with me”. Unperturbed, I walked down the Boulevard de Clichy, past the Moulin Rouge and a dozen different storefronts with discreet tassels and veils to shield what was going on in the inside to passers-by until in the distance, I spotted Timhotel St Georges, my home for the night.

Fortunately it was a charming and smart hotel chain and after dropping off my bags and freshening up, I made my way into the centre of Montmartre for my first sight of the trip, the Sacre-Coeur church; a behemoth in Roman and Byzantine style which gives fabulous views over Paris.

After seeing inside the vast nineteenth century structure, I decided to pay the five Euros to make my way the 300 steps to the dome and crypt to see the wonderful panorama over the city. After climbing to what I thought was the top, I made my way along a narrow message to get a closer look at the architecture and take some snaps of the landmarks visible below.

To the left of me, a door creaked open and a craggy gent, who I presumed was a caretaker, popped out. I assumed that was the end of the path as, looking through the open doorway, I only saw a dim light and a few steps leading to a closed passage. I made my way back to where I came in and back down the massive stairwell. When I reached the bottom, I met a helpful young couple composed of an American girl and her French boyfriend.

They informed me that I couldn’t exit this way as they made their way up the staircase and try as I might, I couldn’t pull open the gate at the bottom to let myself out. Traipsing back up the 300 steps I followed the narrow pathway past the couple who’d stopped to admire the views and realised there was an extra section I’d missed. After spending a quarter of an hour further admiring the even greater perspective offered by this further part of the tour, I meticulously found what was definitely the exit, made my way down and pushed open a fire-door to reach the crypt  – a stone chamber in the church’s vault – at the bottom which was closed because it was a weekday afternoon.

As the doorway slammed shut behind me, I made my way to the large wooden doors which led to the outside. But try as I might, I couldn’t force them open. I now appeared to be stuck in the enclosed crypt of one of the largest churches in Paris alone, with no way out. I banged on the door to attract attention from anyone outside but no one came and none of the various handles and latches on the structure responded to my turns and pulls.

A few minutes later, I heard some steps down the staircase from the other side of the fire exit. I rushed over and began knocking on the door and sure enough, the figures on the other side pushed it open.

“You again…”, the French half of the couple said – like he was meeting an old friend – as they made their way into the crypt. I explained that the doors to leave the building were locked and that there didn’t seem to be a way out.

Telling his girlfriend to hold the fire exit open, the guy made his way to the large open doors, inspected them for a second and then effortlessly pulled them open. After uttering an embarrassed “Merci”, I made my way outside.

The rest of the afternoon proved relatively straightforward as I took in the rest of the attractions in Montmartre including the Salvador Dali museum, the Place du Tertre and its large vineyard unusually located in a built-up residential area.

After a late-night guided tour of the backstreets of the village, I headed back to Timhotel for a night’s rest and to plan the next day’s sightseeing. As I approached my hotel, a man suddenly began animatedly talking to me in front of the establishment “Sexodrome”. and gesturing to something in the distance. Not quite following his quick French jib, another gentlemen came up to me and pointed to a woman standing between two cars. Amidst the $ex shops and adult theatres, I began to get the feeling somehow they were touting for business and that this lady was the femme du jour. Exasperated I said in French that I couldn’t understand what they were saying.

Realising my Anglicised heritage, they switched to my mother tongue, explaining that they were filming a movie and that they needed me to cross the street or stay where I was. At first I thought they meant that they wanted me to do that so they could film it and include it in their film but it became clear that they just needed me to stay out of shot as a scene was about to be started.

Agreeing, I waited patiently with them at the roadside and saw a guy which a large camera scuttle backwards as two men on bicycles in Mickey Mouse masks rode past. After they had gone by, the camera swung to a shop window where a man in face paint and a woman sucking a giant lollipop talked. Half a minute later, someone yelled cut and I was informed that I could now go on my way.

Wishing them “Bonne chance”, I sidled between them and into Timhotel. As I collected my room key, the clerk wished me a good evening. I’d had one already, I thought to myself.