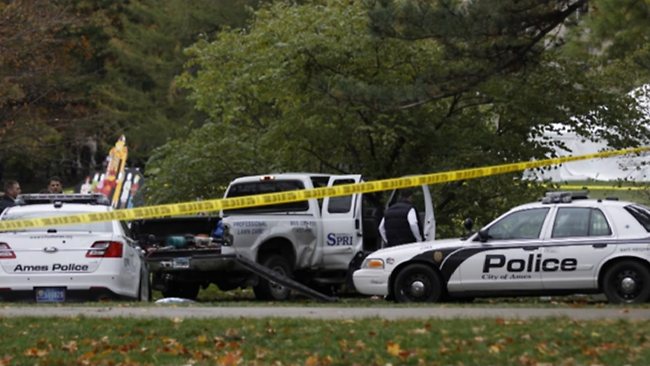 Father James Comstock called the police to teach his son a lesson when he took off with his truck. However, this lesson ended with his son being shot dead.

It’s tough being a father, and sometimes it’s real tough. James Comstock found this out the tragic and hard way. After an argument with his father, 19 year old Tyler Comstock took off in his dad’s truck. At this point Mr Comstock decided he would teach his son a lesson and put an end to this sort of behaviour by putting a scare into him, so he called the police and reported his vehicle as stolen and informed them that it was his son.

This lesson resulted in his son being shot dead by Police Officer Adam McPherson. After police found the vehicle, with Tyler driving, they signalled for him to pull over. However, the police officers involved allege Tyler instead immediately sped off against one-way traffic in bike and pedestrian lanes. Following this a pursuit ensued, a pursuit that lead into the Iowa State University campus, where students and lecturers alike were forced to jump out of the way. As police reports state.

When the chase eventually came to a stop in a wooded area, it is alleged that Tyler revved his engine and moved the car back with force, and allegedly going so far as to ram the police vehicles that had been pursuing him. At this point McPherson fired six shots into the truck, two of which hit Tyler, and he was pronounced dead soon after.

The shooting was deemed as necessary according to the official report which states it required “to stop the ongoing threat to the officers and the public.” This has of course caused a furore in the Comstock family who are demanding answers. Tyler’s step-grandfather has been quoted as saying “So he didn’t shut the damn truck off, so let’s fire six rounds at him? We’re confused, and we don’t understand.”

Tyler’s distraught father, James, who made the call initially, has said “He took off with my truck. I call the police, and they kill him. It was over a damn pack of cigarettes.” Though his father has said his son has had some trouble with the law, and was in a broke up over a recent break-up, aside from this incident he was also trying to turn his life around, working on obtaining a GED from Des Moines Area Community College. “He was a smart kid. He made his own computers. He was into I.T.”

Further upset has come for the family, since the revelation that it had been suggested twice by a member of the Ames police department that they should call off the chase. The officer who fired the shots, Adam McPherson, is currently on paid leave as he awaits the findings of his departments investigation.

Check out a news report on the incident below, and a leaked compilation of the radio discussions of the police officers in pursuit of Tyler, and their department.