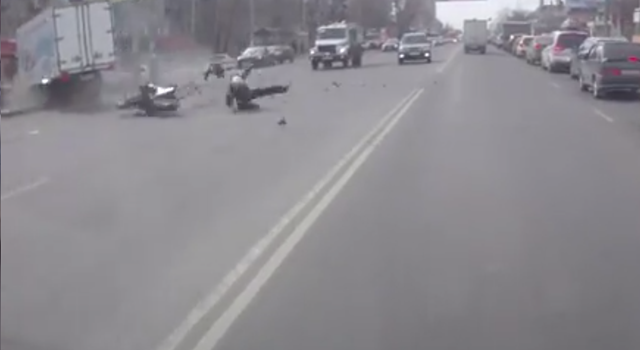 Anyone worth his internet stripes has seen a butt-tonne of Russian dash-cam videos over the last year or so. The Russians had them installed en masse to try to prevent phony insurance scams and the like. This means that there’s been hours and hours of road footage recorded; accidents are fairly common place on Russian roads, so of course there’s been plenty of that recorded too.

Today I came across this video of a fatal motorbike accident that occurred earlier this week in Chelyabinsk, south-eastern Russia. It’s not NSFW but it is pretty harsh when you know that the guy died there and then. Not even a helmet can save you sometimes. The plot’s pretty simple: lorry, motorbike, rag doll.

â˜› Next: The Best Of Russian Dashcams