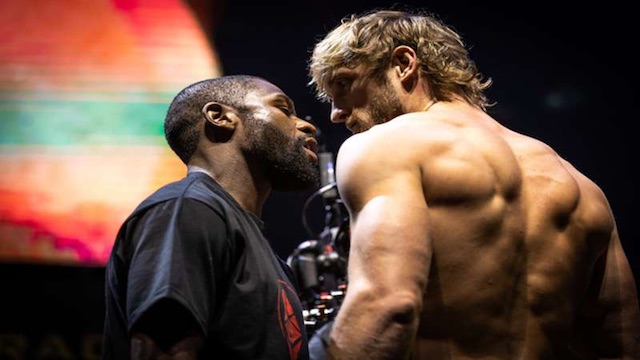 Did Floyd help him out here?

It seems ridiculous to think that we were going to get anything other than the sloppy hugging contest that we saw on Sunday night from Logan Paul and Floyd Mayweather in their exhibition boxing match, but it seems like millions of people still chucked out $50 for the privilege as they thought that they might actually see a contest.

I suppose in fairness to Floyd, he didn’t knock out Logan Paul and let him go for eight rounds but now a conspiracy theory video is doing the rounds claiming that Mayweather actually did spark Paul out but held him up afterwards so that people weren’t disappointed with the quality of the fight and how quickly it was over. Take a look at it below and see what you think:

The moment Floyd Mayweather Knocked out Logan Paul but held him up so the fight can continue. #FloydMayweather #loganPaulVsmayweather pic.twitter.com/bF0B1POfQh

Yep, that does sound like Floyd smacked him awfully hard there and then is also holding him up afterwards because Logan literally looks like he’s going to fall flat on his face if Floyd doesn’t catch him. This was also right at the end of the round, so Floyd only had to do it for a few seconds before Paul could stumble back to his corner and have a little rest and that makes this idea a bit more legitimate, especially when you consider that Floyd probably could have knocked him out at any point but just kept it going for the people back at home who had actually paid the money to watch it.

Sadly, we’re never gonna know whether that is what happened or not, but it’s just something else for us to think about during this absolute mockery of a boxing match/exhibition. Do everyone a favour and next time one of the Paul brothers fights, don’t pay for it or tune in. Give some of your money to a real boxer out there.

For more of the same, check out Floyd saying that he robbed everyone who paid to watch that fight. See what I mean?