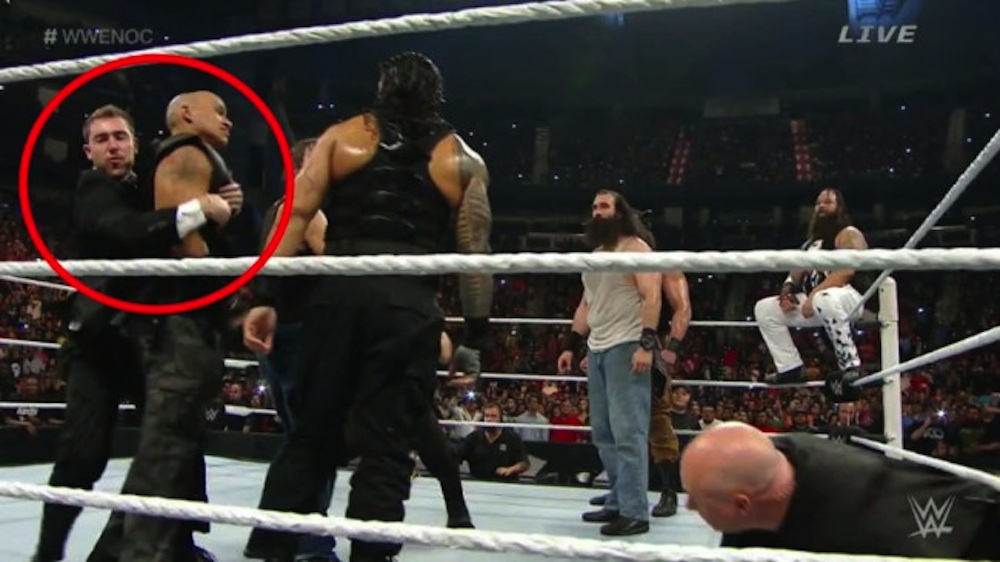 This guy is lucky he didn’t get powerbombed out of the ring.

Last night was WWE Night Of Champions (there are probably going to be spoilers in this article if you don’t want to know what happened) and one of the most random incidents of the night came when a fan jumped into the ring to pretend to be Dean Ambrose and Roman Reigns’ mystery tag team partner when they went up against the Wyatt Family.

It’s unclear where the fan came from but he’s dressed in full wrestling gear – wearing what looks like that chest protector that D Lo Brown used to wear all the time – which shows he was ready for the call up. To be honest you’ve got to laugh at this dude coming into the ring and standing to attention next to the pair like he’s actually supposed to be there, rather than just jumping in the ring and hugging them or something. What a joker.

Of course, Reigns and Ambrose’s tag team partner ended up being the returning Chris Jericho, who ended up having a comeback to forget as he got choked out as his team lost the match, but the real star was this idiot running into the ring. Let’s hope the WWE give him a contract.

The funny thing is that this seems to be happening more and more in WWE lately – it was only a couple of weeks ago where this guy who looked like he had travelled forward in time from a late 90s nu metal band jumped over the barrier and tried to escort Seth Rollins to the ring. Weird.