My piss was well and truly boiled this week when I happened upon this godawful drivel currently getting a ton of likes and shares on that great “click first, think later” hive mind that we like to call Facebook; 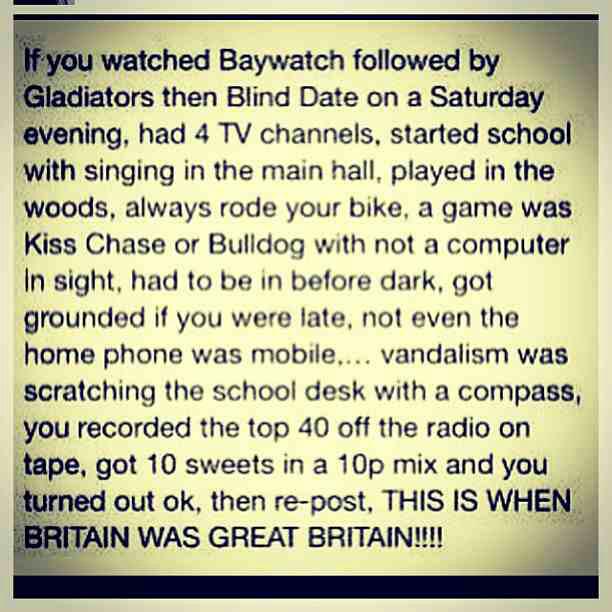 A couple of friends had shared it, complete with the usual “haha omg SO true” endorsements from clusters of like-minded, misty-eyed killjoys. The rough gist of it seemed to be this: Lots Of Mediocre British Institutions We Had While Growing Up Were Actually Awesome. What the herd failed to factor into their equation was that the whole thing is complete bollocks and as flimsy as wet toilet paper. Let’s go through it line by line, shall we?

Jesus Christ, who the hell would want to spend THAT much time in front of the TV? Your eyes would pop out. I’d much rather be down the pub or at a gig or looking at smut on the internet. None of the above were possible at the time as I wasn’t old enough. Drag. Oh and kitsch value aside, all three programs were shite.

We had four TV channels for a very long time, but only because we didn’t have/couldn’t afford Sky. Some of my friends did and I remember being insanely jealous as they boasted about getting to watch The Simpsons and taping Predator off of Sky Movies. Now we have Virgin Media at my place and I can record entire seasons of South Park. That’s way better than watching Robocop on ITV with all the swearing cut out, EVEN WHEN it was being shown after 9pm. Twats.

What the fvck is this, the 19th Century?! We definitely didn’t do that. Did you? All I remember about school is thinking the dinners were shit and swapping Sega games with my friends.

‘…played in the woods, always rode your bike…’

Seriously, where did YOU grow up? Sherwood Forest? Playing in the woods sounds awesome but being that I grew up in suburban London, woods were a bit hard to come by, you know? Plus I can still play in the woods now due to, oh I don’t know, free will or whatever? Same goes for riding a bike, you delusional prick.

Oh piss off. A game is whatever children want it to be, which covers everything from hopscotch to Monopoly to Tomb Raider. All my childhood friends had a computer or a games console and we loved the shit out of them. People still play Kiss Chase, only now it’s called Going On The Pull. Oh and Bulldog might be great if you’re at a British public school surrounded by jocks but I never really enjoyed dudes grabbing me and knocking me to the ground. Isn’t that like some form of assault?

‘Had to be in before it got dark, got grounded if you were late, not even the home phone was mobile…’

Most parents want their children home before dark so they don’t get murdered or become heroin addicts. Mobile phones are practical and make life easier. ALSO, remember that awesome night out you had because of a random text message sent out of the blue? That was pretty sweet wasn’t it? Yeah it was. Now shut up. (Also: note how this is all about how cool old British stuff was but this person is using the ultra-American term ‘grounded’.  Chimp.)

‘Vandalism was scratching the school desk with a compass…’

Hate to break it you, chum, but vandalism has a) existed since the dawn of time and b) is usually a bit stronger than defacing school property, whether you’re in Sussex or Somalia.  I can remember a kid being kicked out of my secondary school in Fulham for trying to set the entire building on fire. Compasses clearly didn’t do it for him.

‘You recorded the Top 40 off the radio on tape…’

Guilty as charged, but only because ANALOGUE RECORDING WAS THE ONLY OPTION YOU FUCKING IDIOT. Now we have the internet and it’s amazing! So much great music from all over the world has come into my life thanks to the digital age, plus I get to find out about awesome free gigs and downloads via portals like Twitter. That shits all over listening to some twat prattle on about who was at Number 1 that week.

This just confused me. Does this person not understand the concept of inflation?

‘THIS IS WHEN BRITAIN WAS GREAT BRITAIN!!!’

Imagine my shock when the whole thing turned out to be BNP propaganda in disguise. Some things about this country were cool when I was growing up (Trap Door,  Knightmare, The ITV Chart Show, all of which this gimp fails to mention), other things less so. Either way it’s got dick all to do with cheap sweets.

Fun fact: life was never better way back when. It was probably simpler, but simpler doesn’t always mean better. Today isn’t perfect, but it’s still pretty awesome when you think about it. It’s also what you decide you want it to be, good or bad. Anyway, if any of your friends post this then tell them not to be so fvcking jaded and/or over-patriotic.