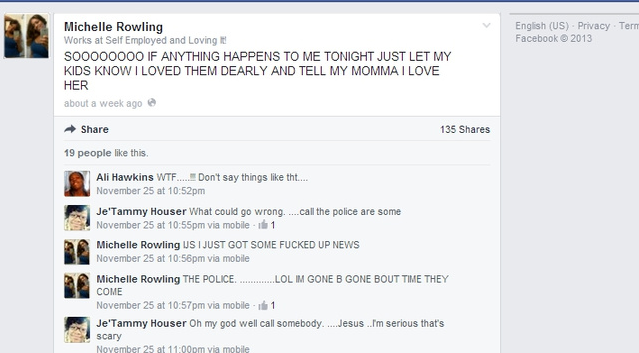 That’s some foreshadowing but surely you should probably do something more useful if you legitimately think you’re going to be murdered.

A 25 year old East St Louis woman who posted the Facebook update you can see above on November the 25th was – perhaps unsurprisingly – discovered stabbed to death in her apartment on Saturday night.

In case you can’t read it in the picture above then here’s what Michelle Rowling said: ‘SOOOOOOOOOOO IF ANYTHING HAPPENS TO ME TONIGHT JUST LET MY KIDS KNOW I LOVED THEM DEARLY AND TELL MY MOMMA I LOVE HER’. This actually provoked a response with a bunch of people in her feed which would suggest that it wasn’t actually something that she would do regularly (you know the type) but that didn’t mean that anyone actually did anything to help her, and she was found stabbed and bleeding out in her apartment complex on Saturday after the police had been called to check out a domestic disturbance.

The number one suspect in the case is her ex-boyfriend Montell Cooper, who had been jailed in August for assaulting Michelle. For some reason, Michelle actually testified on behalf of Cooper – even though he had assaulted her before – which meant that his sentence was reduced to probation. Rowling apparently forced through his release, even though the State’s attorney Brendan Kelly advised that he stayed behind bars. Big mistake.

Rowling’s relatives think that Cooper killed her because she was trying to leave him and get on with her life, although she didn’t wish to see him in jail judging by her actions. Cooper is still at large in St.Louis. Here’s a mug shot of him in case anyone reading Sick Chirpse is currently in St Louis right now and might spot him. 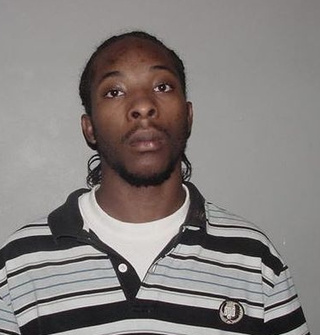