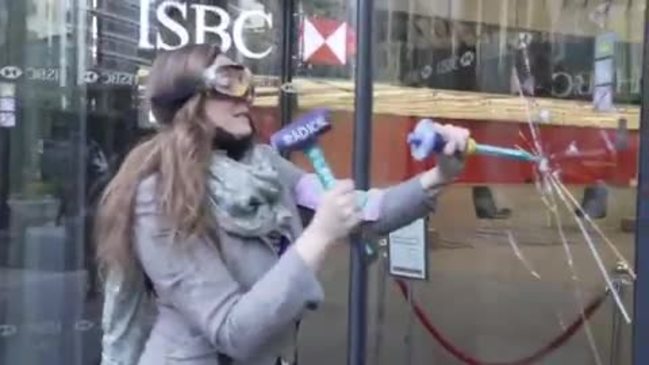 So much has happened in the past year that I had genuinely forgotten that Extinction Rebellion even existed, but thankfully they’re back to remind us through smashing up HSBC HQ to celebrate ‘Earth Day’. Way to go guys – don’t think that will be problematic at all.

HSBC headquarter is located in Canary Wharf, London and protesters decided to smash 18 windows in the building to draw attention to the fact that the company has multiple links to the fossil fuel industry ,all of which obviously contribute hugely to climate change. The organisation released the following statement about their actions:

BREAKING: This is an Act of Care.

Despite HSBC’s pledge to shrink its carbon footprint to net zero by 2050, their current climate plan still allows the bank to finance coal power, and provides no basis to turn away clients or cancel contracts based on links to the fossil fuel industry.

Yeah in fairness to them, I doubt anyone would be talking about this if they had just released a statement and hadn’t bothered smashing up the building, but you just know that so many climate change deniers/complainers/whatever are going to moan about their violent vandalism as a response to this, so they can’t really win. The nine women who were involved did all sit down on the floor and wait to be arrested following their actions, so you can’t really say that they were being massive dickheads about it – they got their point across and then immediately decided to wait and face the consequences.

HSBC have apparently contributed $110 billion to the fossil fuel industry since 2016 and I would never have known that if Extinction Rebellion hadn’t decided to take this course of action, so fair play for that I guess. Up to me/us to boycott HSBC now I suppose. Thanks for reading.

For more of the same, check out the best and worst footage from the infamous Extinction Rebellion protests in London back in 2019. Seems like so long ago now.