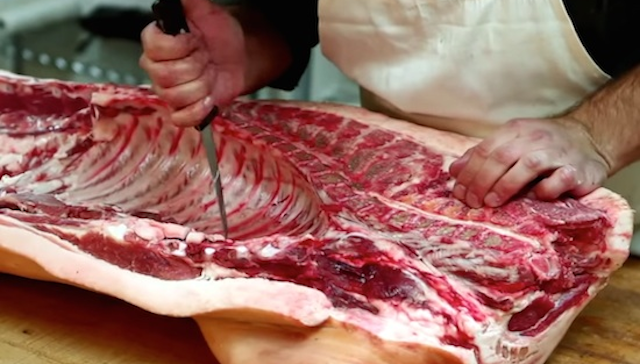 Dexter eat your heart out.

This is pretty grisly stuff so if you’re not into that then maybe you shouldn’t check it out. You definitely shouldn’t watch it if you’re a vegan or a vegetarian, that’s for sure.

It’s basically a clip of expert butcher Tom Mylan dissecting a cow with some razor sharp knives that can cut through anything and explaining where all the different cuts of meat on it come from. So if you’ve ever wondered where a tenderloin, a pork chop or a spare rib come from, now you’ll know.

What’s probably most unnerving about it is that Tom can cut up pretty much an entire pig in under three minutes. It seemed to take Dexter a lot longer than that to cut up dead bodies right – maybe they’re slightly tougher than a pig though huh?