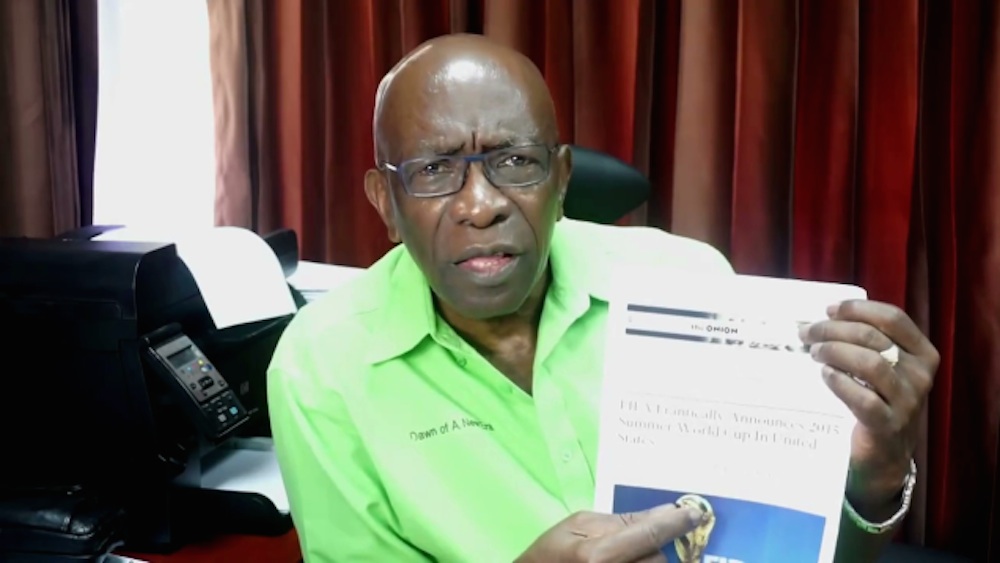 Obviously everyone heard about all the FIFA officials getting arrested and charged with corruption last week, and everyone figured that they’re probably all going to go down hard. Former Vice President Jack Warner tried to buck this trend though by uploading a video to his Facebook page (known as Warner TV) in an attempt to prove his innocence.

Unfortunately for him, he ended up looking like even more of a moron after he cited an article from The Onion in his defence which is so obviously satire that it’s unbelievable that someone who has worked for FIFA for 30 years could actually mistake it as being real. Either he really is this stupid, or it’s just a clever ruse to make him look stupid so that he can play dumb and say he didn’t know/realise that there was any corruption going on in the organisation to his knowledge. I don’t think that he would be smart enough to come up with something like that though, and I’m not really convinced that it would work anyway. It might be his only option at the moment though I suppose.

The whole story gets even more ridiculous when you consider the specifics of what Warner is talking about in the video. The Onion article he cites features the following paragraph:

We are thrilled to reveal that, for the first time in 21 years, the World Cup will finally return to America, with matches set to kick off today at 5 p.m. local time in Los Angeles,” said FIFA president Sepp Blatter, smiling broadly before unveiling the tournament’s official logo, a hand-drawn stick figure kicking a soccer ball with “USA 2015!” hastily scribbled in black marker above its head.

Warner actually seems to believe that this is true, and asks the question: ‘If FIFA is so bad, why is it USA wants to keep the FIFA World Cup?’ Well, even if this was happening it’s probably the same reason you’re a corrupt official: cold hard cash, but the fact of the matter is that it’s so obviously incorrect that it seems unfathomable that even the most clueless person in football would fall for it. I mean a World Cup starting in an odd numbered year without any notice whatsoever? Literally makes no sense, although maybe that’s what Warner wants you to think. Given that the video has been deleted from Facebook though it doesn’t seem likely.

Aside from that obvious faux pas, there are a number of other great parts in the video like the dramatic music in the background that you might hear in a Hollywood blockbuster or the part where he mentions the blank cheques that supporters have sent into him. It really is a satirists’ wet dream and it’s almost surprising that it hasn’t actually been produced in conjunction with The Onion.