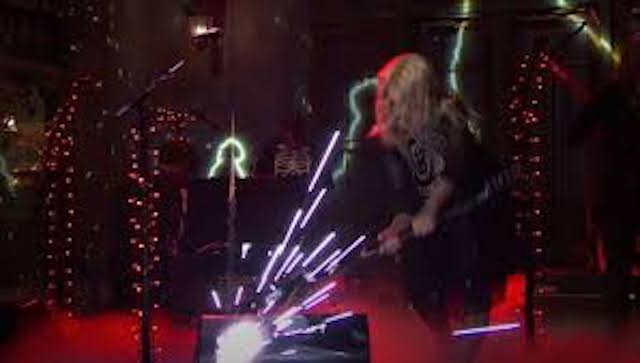 Why is everyone so butthurt about this?

Not really sure how well known this is in this country, but it’s pretty much a sign that you’ve made it in the music world over in America if you perform on Saturday Night Live and this honour was bestowed on alt rock/indie queen Phoebe Bridgers over the weekend.

Naturally, she wanted to make a big impact during her performance and so decided to smash her guitar live on stage during her final song ‘I Know The End’ like so many other rock stars have done before her. You can take a look at both of the songs she performed and the guitar smash below:

phoebe bridgers screaming into the mic and then smashing her guitar on snl is something that can be so personal pic.twitter.com/0SXQILc011

Now, I’ll be honest – I think her guitar smash was fairly lame but that’s mainly because she didn’t actually manage to smash it up that much and it just came across looking kind of half hearted in comparison to when people like Kurt Cobain and Joe Strummer did it in the past. However, I still think it’s pretty cool that she did it and I am in no way going to criticise her for her decision to do this like so many people on Twitter seemed desperate to after watching her on Saturday night. Get a load of this:

Why did this woman, Phoebe Bridgers, destroy her guitar on SNL?

I mean, I didn’t care much for the song either, but that seemed extra. pic.twitter.com/ayXgFXtex4

I feel embarrassed for her watching it. I mean Sinead O’Connor was on SNL long before I was even born and the stunt of her tearing up the Pope’s picture was so inappropriate and infamous I know all about it.

A very unjustifiably awkward display of white privilege. After the year the world has had with pain, suffering and death from #Covid it felt inappropriate.
Think #charity or #donation or just being a positive role model.

No clue who this is. Googled her and have even less of a clue, but the way she’s destroying her guitar makes it look like she’s having a tantrum, and I’m quite frankly done with grown ass adults throwing public tantrums.

They sucked. Smashing guitars and skeleton suits were only cool when The Who did it over 50 years ago. This bunch were like some Lilith Fair rejects just phoning it in.

I thought the exact same thing! As someone who grew up without much, I can’t wrap my head around destroying stuff just for the sake of destroying it. On the contrary, I’m so careful with my possessions because I’m so grateful for what I have now.

It looked pathetic. She needs to lift weights and work out more so she can do it more effectively. She was no Pete Townsend or John Entwhistle.

While I was looking for any discernible talent with the 1st song, the 2nd was even worse. The child could barely swing the guitar….the high schoolers were just giddy to be on tv. Did Lorne owe her daddy a favor? #SNL #anothercrappyseason

Thats the point they were Rock Stars. They had proven themselves Artistically & commercialy. That’s why they could get away with it. Neither applies to whoever she thinks she is. I missed it due to FF tech. That’s due to silly skeleton suits & poor music. At 65, I feel validated

Why is it always the old white men who think their opinions about young women are wanted? Literally stop.

It really was disgusting. It wasn’t cool when hair bands and whatever did it (The Who?), either. It hasn’t aged well here. But, she barely managed to put a scratch in it, too, what a fail on all fronts.

It made me angry. There are so many who’d love to have a guitar like that and can’t afford it, and she’s just throwing hers away in front of the world. 😠

I have to agree. I don’t like the smashing of instruments in general because it seems wasteful, but it is especially odd looking when you aren’t playing lead guitar and there’s no live audience there.

Geez. People really don’t have anything better to dunk on one of the most critically and poplarly acclaimed artists of the year hey? Definitely seems like a lot of people are angry about the fact that she’s a woman doing this considering that so many famous men have done it in the past and just been hailed as badasses for doing so.

I said I thought Phoebe’s effort was a bit lame – especially when you find out that the guitar and monitor were both built especially for her to destroy – but I still think she looked cool and it’s a pretty iconic moment for her on Saturday Night Live. Don’t know why so many people had to drag her for it, but there were a hell of a lot of people saying that they thought it was cool and awesome for her too. Sadly, it’s always these assholes that seem to get the most coverage.

There’s no such thing as bad publicity though and it certainly got everyone talking so it’s probably a win win for Phoebe Bridgers. Go listen to her if you haven’t already.

For more of the same, check out the Dropkick Murphys smashing a guitar in the face of a Nazi saluting skinhead live on stage. That was absolutely awesome.