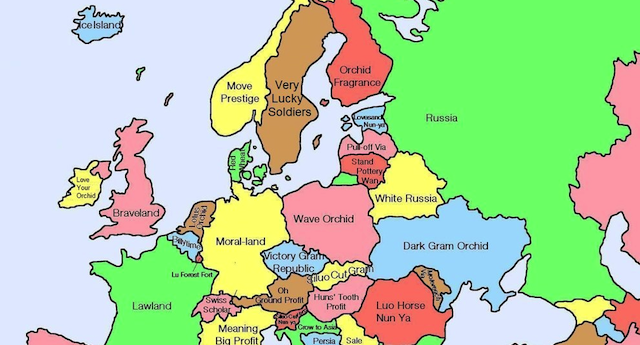 This makes absolutely no sense at all.

You can get a map of Europe and learn something new from it pretty much every day on Sick Chirpse – it wasn’t so long ago we brought you the changing European borders over 1000 years map – now we’re bringing you this one of the literal translations of what Chinese people call every country and it’s pretty hilarious. You can see the map below (click to enlarge it) but endless to say some of the country names are really funny and dumb. Why the hell is Spain called West Classtooth and Portugal is Grapetooth? Surely that doesn’t make any sense? Why is Sweden called Very Lucky Soldiers? Why the hell is the Republic Of Ireland called Love Your Orchid? Just what is going on with it? The blogger who created the map – a guy called Hawnowshaokao offered the following explanation:

This is not a serious translation by any means — I’ve translated the names in a pedantic, literal way, character-by-character, which wouldn’t make sense to most Chinese people.

I don’t want to make fun of Chinese people or the Chinese language, it’s just a funny way for me to remember the names of countries as I learn the language. Chinese people don’t really think of America as Beautiful Country or the UK as Brave Country any more than we think of Turkey as a bird. Any language unlike your own looks strange from the outside, but I hope people can use this as a stepping stone to learning Chinese rather than laughing at it.

My wife (an actual Chinese person) helped make it, and it’s as much hers as it is mine.

Sweden and Switzerland are the wrong way round. This was a mistake, but I’m leaving it in as people do tend to confuse the two as they have similar names in Chinese.

Russia is just Russia because I wanted to call Belarus White Russia — this is both the literal Chinese name and the literal old English name, and the Chinese name, Bai E Luo Si, sounds just like the real name. Which is pretty neat.

So there you go, still doesn’t make much sense but probably a bit more than the top 7 trippiest YouTube videos of all time. 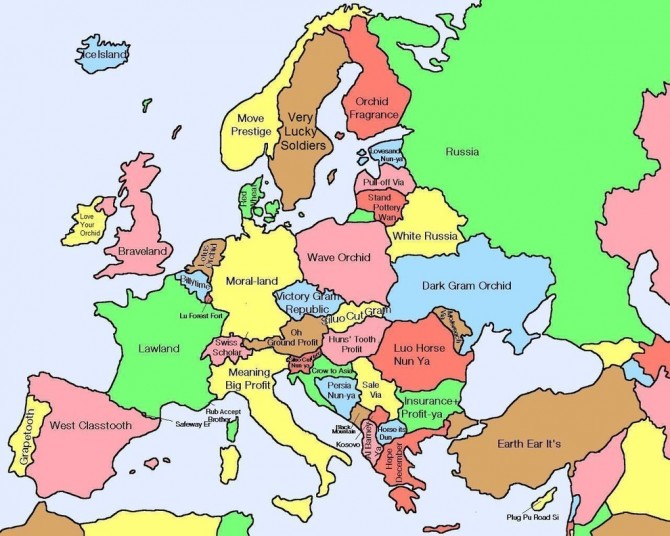