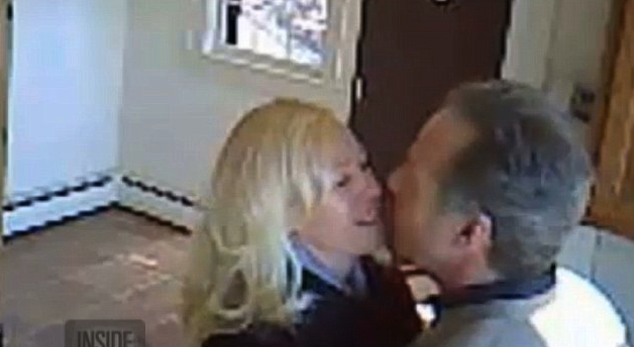 You could have at least got a room guys.

Way to get busted guys. If you’re having an affair I guess you probably wouldn’t expect the guy whose house you’re selling to have rigged it with hidden cameras JUST IN CASE something like this happens, but it just goes to show you can never be too careful when engaging in illicit behaviour.

It happened over in New Jersey (lol of course) where a guy called Richard Weiner was selling his house through an estate agent/realtor called Coldwell Banker and dealing with estate agents Robert Lindsay and Jeannemarie Phelan. They told Weiner (Weiner, heh) that his house would sell for $650,000 but he suspected that they deliberately inflated the market value so they could continue their affair in the house.

Geez, what cheapskates, you’d think they could at least get a room every now and again. Although it’s entirely possible they thought that Weiner was such a weiner that he would never figure it out or do anything about it.

Unfortunately they were wrong though, because Weiner got the last laugh  when he installed secret cameras inside the house and managed to obtain footage of them having sex at least ten times in it, including on his marital bed. Some people have no respect huh? Unfortunately the video is kind of crappy and doesn’t feature any of the good stuff, but you can pretty much tell what’s going on with them. Kinky.

Weiner is currently involved with a lawsuit against Lindsay and Phelan – who have been fired by Coldwell Banker – claiming that they violated Code of Ethics and Standards of Practice of the National Association of Realtors. He also said that he and his wife ‘could no longer use the bedroom or the remainder of the house and were uncomfortable and disgusted even being in their house.’

Sounds like he’s heading for a heavy payout, although it might be hard for him to shift his house afterwards because nobody will trust that he hasn’t installed a shit load of hidden cameras in there. So it goes.