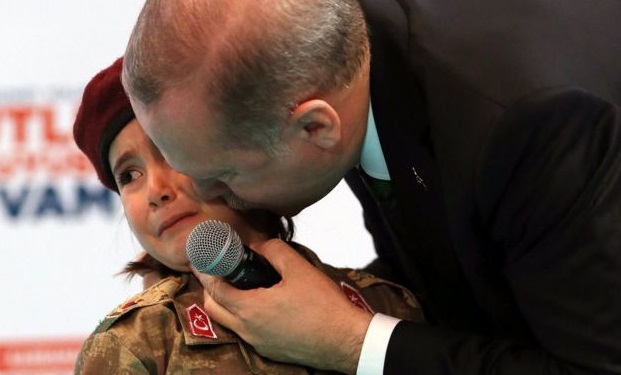 And you thought Trump was bad.

Just when you thought Turkish President Recep Tayyip Erdogan couldn’t be any worse a human being, he’s made a 6-year-old girl cry by telling her that Turkey would honour her if she dies for her country.

If she is martyred, a flag will be put on her, God willing.

She is ready for anything, aren’t you?

Erm no mate, she’s not “ready for anything”. She’s 6 years old! Get her some Barbie dolls and a glass of milk, not a military outfit and a gun.

Respect to the little girl though, she held it together pretty well in the end, even when it got a bit weird with the double kiss. I know if Theresa May asked my 6-year-old self to go to war I’d probably have cried, maybe peed my pants a bit too.