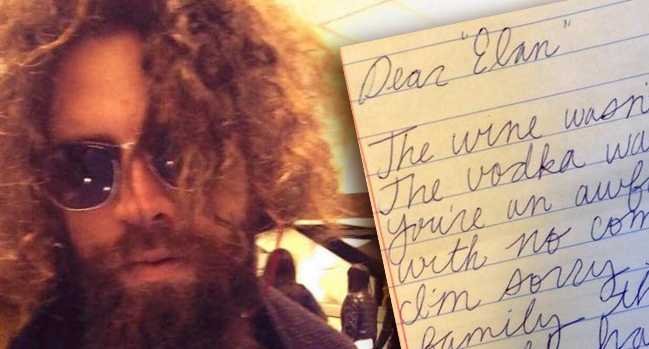 Unfortunately, Elan Gale has come clean about his epic thanksgiving note war and it seems like he’s a big faker.

This is kind of lame but it only goes to show that if you’re actually really smart/funny and great at Twitter/social media then you can get around 170K new followers just by making something up, because that’s exactly what Elan Gale did over Thanksgiving weekend with his Thanksgiving note routine. It seemed like everyone bought it too, including us. You can read all about it here, but basically Elan Gale told a hysterical passenger on a flight home to eat his dick via notes passed between them by a flight attendant.

Of course, as with anything on the internet people began to call its bluff almost as soon as it appeared, but for the most part everyone seemed to lap it up and believe it. However, when people started making up other stories about it – for example that the other passenger in the feud, loving referred to as Diane from 7A, had cancer – Elan Gale decided to come clean about the whole incident.

Last night he sent the following series of tweets, which pretty much confirms he made the whole thing up. I mean he didn’t even get Diane’s name right – calling her Diana instead – which adequately sums up his entire ambivalence to the whole situation.

So many questions unanswered about Diane. In 15 minutes I will post the photo and hopefully we can resolve all this

Here is Diana sitting in a chair pic.twitter.com/OE5q7j8dhr