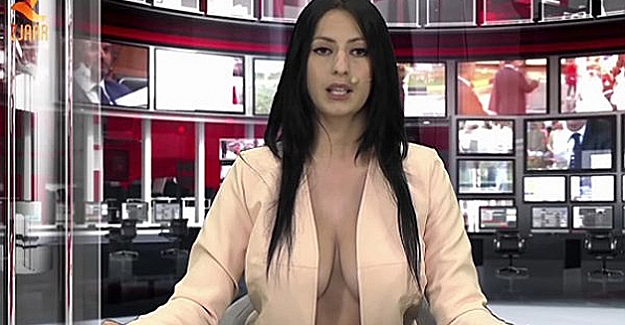 This is an excellent example of how playing to your strengths will always get you the desired result.

21 year old Enki Bracaj has landed her dream job on Albanian TV after auditioning with her boobs out during screen tests — turned out to be a genius move in the end.

TV bosses were so impressed with Enki that they offered her the newsreader role straight away and she now presents an international news programme which has seen boosted ratings since she joined. No surprises there then.

A spokesperson for the channel said:

Most agree that her presentation style is somewhat awkward, but we are working on that and to be honest it doesn’t seem to be doing any harm to her viewing figures.

Enki kept her own comments on the situation brief, saying simply that she had “found a way to put myself ahead. It is not easy to enter the world of television”. Boss moves only:

So in case you needed a reminder on how the world works; if you’ve got a massive pair of boobs then you’re getting the newsreader job (and probably most jobs) every time. But let’s not forget Enki was smart enough to use her assets to her advantage and land the role even though her own bosses called her presenting style awkward. That’s just a prime example of knowing your strengths and making them work for you. Let that be a lesson to everyone.

In Egypt though, a girl in a similar situation might get thrown into prison.