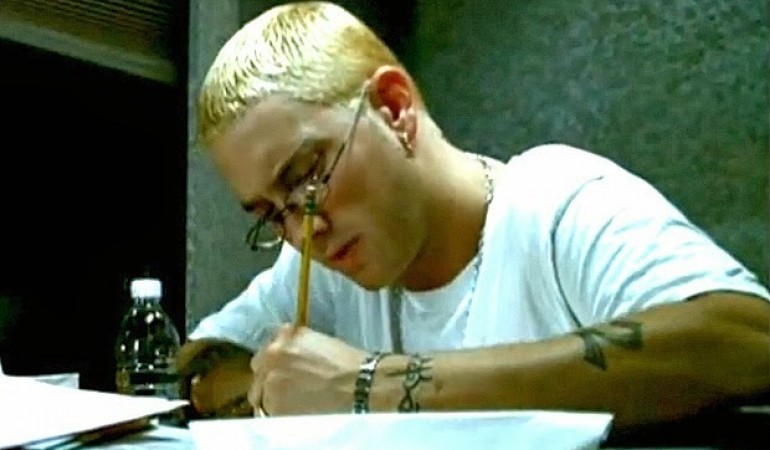 ‘Stan’ would have been even better if it wasn’t for this super stoner.

Everyone knows that Eminem’s ‘Stan’ is one of the greatest concept songs in music history, but it could have been even better according to Eminem.

Apparently one of the sound engineers working on the song was such a bunhead that he accidentally recorded over Eminem’s first take of the killer third verse. That’s the one where Stan’s on his way to drive himself and his girlfriend off a bridge.

Em says the original verse shits all over the verse that actually made it onto the final version, but unfortunately we’ll never get to hear it.

He told The Fader:

When we recorded Stan I worked with a couple different engineers but this particular engineer I had never worked with before. While we were recording the third verse of Stan, he started rolling a joint and asked me if I minded if he smoked while we cut. What was I gonna do? Say no? He was already rolling it so I told him “no problem.” Everything was cool and I had gotten all the way to the last 3 lines and I screwed up so all he had to do was punch in my vocals at the end so I could re-do that line and the verse was finished. Back then we were recording on 2 inch tape, so once you recorded over something it’s gone forever. So I’m in the booth waiting and he backs the tape up all the way to the beginning of the verse and punches me in. I realise he’s in the wrong spot and I can’t hear any of my vocals so I start waving my arms and yelling in the mic to try to get his attention. He doesn’t notice so I run into the control room through a cloud of smoke and yell “Yo, I wanted to keep those vocals.” He just looked at me and said “my bad man, you wanna hit this?”

The first half of the verse was GONE. I re-recorded it but you should have heard the original take that shit was WAY better… oh well!”

Just as well it came out pretty dope anyway:

As amazing as the original third verse was though, I doubt it was as good as the remake from this joker in Dublin.