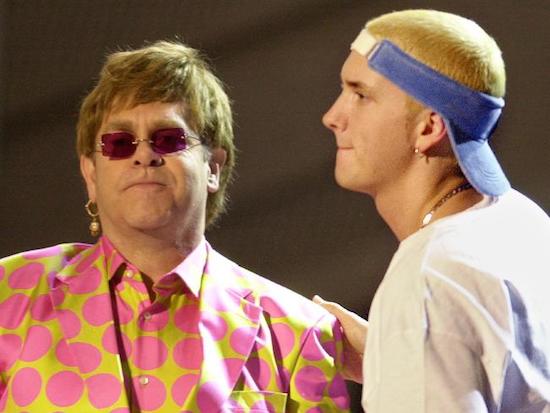 Eminem is well known as one of the most crass and outspoken characters out there, but I think even his biggest fans would probably be kinda surprised about his outrageous gift to Elton John on his wedding day.

The pair apparently became friends when they performed Eminem’s mega hit ‘Stan’ at the Grammys back in 2006 and Marshall wanted to share his happiness for Elton’s marriage on his big day, so decided to send him two diamond encrusted cock rings as a gift. Apparently they remain unused but I’m not so sure knowing Elton John.

Anyway, you can watch him telling the story all about them on The Graham Norton show below. Enjoy:

Gotta love that detail with the velvet cushions right? Although to be honest I thought that a story like that might have been a little more outrageous and Elton could have told it a bit more flamboyantly, but hey I guess you’ve just gotta make do with what you’re given. Sometimes you only need one sentence to tell a story huh?

For more of the same, check out the lookalike Elton’s mom hired for her 90th birthday because they don’t get on. Kinda sad.